"I am a busy man, and Dr. Watson has his patients to attend to." [CREE] 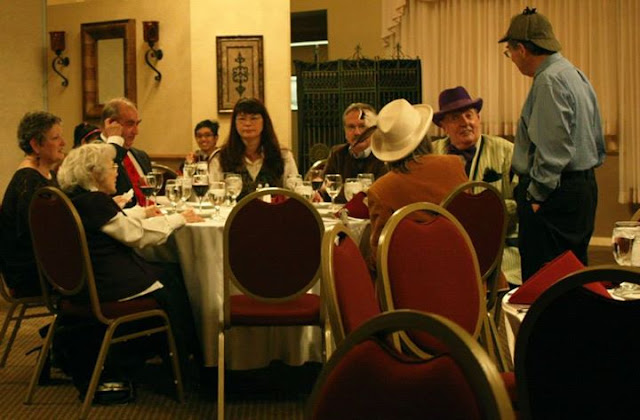 In 1974, when Mary Ake and Nancy Wynn wanted to form a Denver area Sherlock Holmes group, they put a notice in the local newspapers to have an initial meeting at the Bemis Libary in Littleton, Colorado on a Wednesday evening.  "I expected 35 people to show up that night, no more," Mary Ake recalled when I spoke with her over the phone. "Instead, 250 people showed up in the meeting room which surprised me!"

That evening, the crowd was treated to a talk by Ron de Waal, on his recent trip to England, and the meeting wrapped up with the attendees taking the group's oath.  "We had the oath," said Mary Ake, "and I was awed that everyone took it that night. We were a true scion society of the Baker street Irregulars (BSI)!"

Thus,  Dr. Watson's Neglected Patients (DWNP) was formed. The group has allowed Denver area residents to connect and share their love of Sherlock Holmes.  Over the past 40 years the group has grown and continues to be active by hosting annual dinners, spring teas, and a monthly discussion/ trivia meeting.

Darlene Cypser, author and the current Chief Surgeon of the group explains:


"I think DWNP is much more active than it was when I started and that is not just because of all the TV shows and movies. Of course, websites and Facebook pages help spread the word and let us interact in different ways. Sherlockians have long corresponded worldwide through the mail. Now that is a lot faster."


One of the staples of the group is the monthly get-togethers of the Outpatients, a separate subset of DWNP members that meets to drink, have lunch, and discuss a story from the original Sherlock Holmes canon.  "Our first idea was to meet on Wednesdays at my home, and have it be mostly for fellow retirees," said Lawrence Feldman, the Staff Surgeon (i.e. Vice President) of DWNP. "When we began telling people about it, it seemed there were many similarly interested who were still working, and people expressed frustration that they could not attend on a work day. So I got the idea of moving the meetings to Sundays and having it be for lunch at a place like Pints Pub, which provided a British ambience, and had supported DWNP in the past."


The Outpatient meeting is the first Sunday of the month, and the group meets no matter if there are other events that day.  As Lawrence Feldman explains, "Meeting the first Sunday of every month sometimes puts us in conflict with holiday weekends, big football games, even Easter Sunday. Whenever I try to cancel the meeting for a month, the membership just flat out won't let me! So another tradition developed, to go on with the meeting on that first Sunday no matter what. And if some people can't attend every meeting due to these conflicts, that's ok too. This is when I first began to realize that these meetings were really important to people."

Other fun annual activities are the Sherlock Holmes Dinner which is every January and the annual spring tea hosted by the Denver Woman's Press Club.  "Members have organized our participation in cricket matches, plays, talks, tours of the CSI, and other get-togethers," said Darlene Cypser.  "One year I arranged for a local stunt team to demonstrate the art of Bartisu in a skit. They did a great job in the fight, even taking falls. It was quite thrilling. But one member had gone to the restroom, and she asked them if they would do it again. They obliged despite the fact that they were taking the falls on the hard floor without pads. I am sure they had quite a few bruises the next day!"

Upcoming events include a group viewing of the film, Mr. Holmes, dinner with Peter Blau's group The Practical but Limited Geologists, and author talks and presentations as part of The International Exhibition of Sherlock Holmes, which will be at the Denver Museum of Nature and Science beginning in October.

The attendance at the Outpatient Meetings is exploding, and DWNP will continue on as a group for Sherlock Holmes and Sir Arthur Conan Doyle fans to connect in the Denver  metro area.  There's only one change that Chief Surgeon Darlene Cypser would like to make.  "We would like to add more young people to DWNP, including kids."