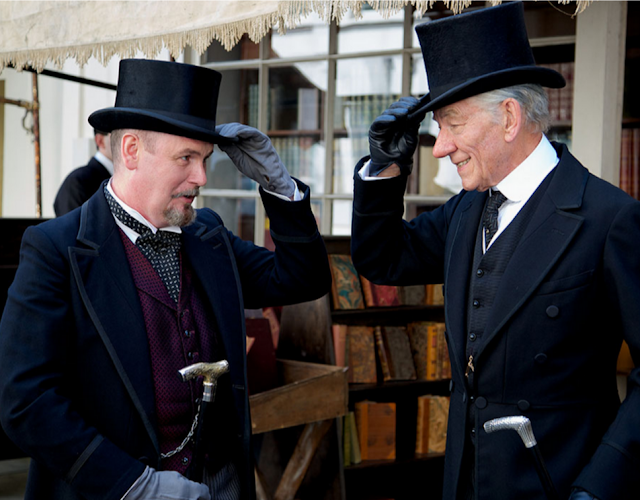 From the tweeted still images, to the multiple trailers, to countless interviews, Mr. Holmes is finally here. And it was well worth the wait. The opening scene sets the tone for the entire movie: you immediately get a glimpse of the man that is Sherlock Holmes (Sir Ian McKellen) as he is in his later years.

Shortly after the opening credits the story begins to unfold in three parts. Sherlock is now retired and living in his cottage with a housekeeper and her son. As he is growing older, dementia has begun to set in. You find that he has just returned from Japan, where he traveled to find ‘prickly ash’ in belief that it would salvage what is left of his mind. The reason he wants to desperately find the plant is because while reading one of Watson’s published short stories, Holmes notices that the ending is wrong, only he can’t remember what really happened.

The story is one of regret, hope and, most of all, family. Regret over the case that ended Holmes’ career. Hope for his quest to find a cure for his aging mind. And the family he has both lost, rejected, and found along the way.

The scenes are beautifully shot, and whether on location or in a studio the transitions between spaces and even the three different storylines is flawless. There was no confusion at what point in the tale anything falls or who is involved, and while this may seem basic practice by any writer, that they have managed to keep that while filming and editing separate but interwoven tales is worth noting.

The settings are colorful and vibrant, often in contradiction with the story being told, but this brings the world to life. Every space is well dressed and fits with the characters' personalities and stations. And you can truly believe not only are they real and in these places but you are present with them.

As for the casting, it was refreshing to see a movie staring Ian McKellen that allows, in some cases, him to act without words. One of the many things that critics admire about him is his ability to tell a story or have a conversation without even opening his mouth. Director Bill Condon has embraced this talent in many scenes but not so many that it felt overused or gimmicky; especially when Holmes is struggling against dementia or the general tiredness of a human body that is giving out. Poignant moments that would have been diminished by words are enhanced by an actor’s ability to not only act his part but feel it.


Milo Parker as Roger, Holmes's protege, while still relatively unknown, is already a force of his own on the screen. His command of Roger’s youthful innocence is well balanced with the child that is having to grow up before his time. His interactions with Holmes highlight both characters growth, the boy in knowledge and the man in admitting his humanity.

Laura Linney shines as Mrs. Munro, who is both Roger’s mother and Holmes’ housekeeper. At times one can not help disfavor but love and weep for her simultaneously. Her hurt from the loss of her husband and sometimes bitterness she has towards Holmes is heartbreaking and so real that you can almost taste the tears she must have cried.


The rest of the cast, a full list of names that you can’t help but recognize, such as Roger Allam, Frances de la Tour, and Philip Davis, comes together with an onscreen chemistry that is sometimes lacking in modern cinema. There is even a nod to fans of Holmesian film interest with Nicholas Rowe donning the deerstalker once again as our favorite Detective.

The only real complaint is that the absence of our beloved Dr. Watson is physically tangible, more than is noticeable in A Slight Trick of the Mind by Mitch Cullen, upon which this film is based. Maybe that is because when thinking back to the canon, Watson often left himself out of most of the details of the stories, and in the book that translates well. However, in the film, the role appears to be split between two different characters: Dr. Barrie (Roger Allam) and the young boy Roger. And while these two make a graceful attempt at the role of Watson, the writing ultimately fails at putting them in our good Doctor's shoes.

This film is a must-see for fans not only of Sherlock Holmes but of the cinema as well. And of course fans of bees, which in a Q&A with Sir Ian recently, he assured us were not harmed in the making of this film. 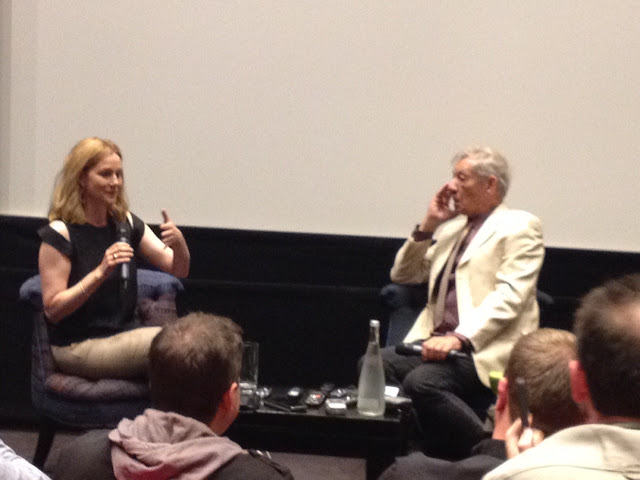