The 200th Anniversary of the Battle of Waterloo

"At Waterloo we were fortunate" [SPEC] 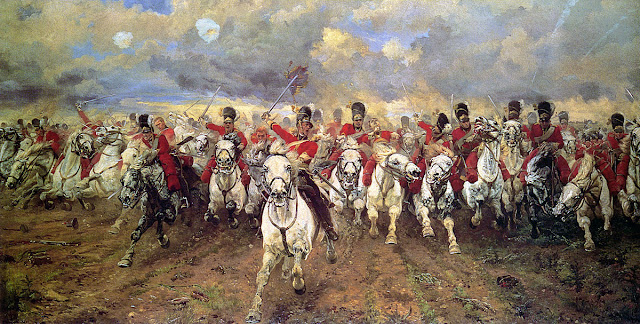 Two hundred years ago today, British and Prussian forces led by the Duke of Wellington defeated French forces led by the Emperor Napoleon, and everything in the European-centered world changed. Without the Battle of Waterloo, fought at a ridge a few miles south of Brussels, Sherlockians would not have the story of "The Six Napoleons," Canada would not have a city named Waterloo (where I now live), and history would not be able to remember the "long Victorian age", stretching from June 1815 to an August 99 years later.

During that long Victorian age the British Empire reached its zenith, Arthur Conan Doyle and Sherlock Holmes were born and lived and worked — and in Britain and the nations linked to it there was no net inflation for 100 years. Stability in prices and interest rates over that long period is the unstated background to many financial facts in the Sherlock Holmes canon, such as Mary Sutherland's New Zealand investments in "A Case of Identity." Such luxuries were possible because after June 18, 1815, Europe was no longer menaced by "Boney," the Emperor whose military and political ambitions knew no bounds.

The Napoleonic Wars (background to Horatio Hornblower's exploits and to North America's piddling little War of 1812) lasted some fifteen years, becoming an obsession in Britain, to say nothing of the effect they had in continental Europe where they were mostly fought. And after Waterloo, and Napoleon's exile to Saint Helena in the South Atlantic Ocean, they cast a long shadow forward.

Eighty years later, Watson could say with a perfectly straight face that "a man who had... received some hereditary family injury through the great war, might conceivably form... an idee fixe and under its influence be capable of any fantastic outrage." The story in which he says that gives many other indications of what a constant presence Napoleon was in British life. (And "the Napoleon of crime" was a natural, and naturally understood, epithet for Moriarty.)

Waterloo, Ontario, and Waterloo, New York, both got their name in 1816, when the news of the battle was fresh. In London, Waterloo Bridge across the Thames was built in 1817 and named as a memorial to the battle. Waterloo Station, from which Holmes and Watson frequently took southbound trains (to Leatherhead in the case of "The Speckled Band," for example) was opened in 1848 by the London and South Western Railway and first named Waterloo Bridge Station, becoming just "Waterloo Station" in 1886 at about the time of "The Beryl Coronet."

The Canon refers directly to the 1815 battle just once, in "The Abbey Grange," when Holmes says: "We have not yet met our Waterloo, Watson, but this is our Marengo, for it begins in defeat and ends in victory." Marengo, fought in Italy in 1800, was a last-minute victory for the French forces, little known today but familiar, like so much else about the Napoleonic Wars, to gentlemen of the 1890s. Waterloo was an undisputed victory for Britain and a disastrous defeat for France.

If Sherlock Holmes was knowledgeable about Napoleon and Waterloo, Arthur Conan Doyle was obsessed: he wrote a short story, "A Straggler of '15", which was turned into the one-act play "Waterloo"; he presents Napoleon in the novels The Great Shadow (with a colourful description of the events at Waterloo) and Uncle Bernac; and, most important, he brings the Napoleonic era to life in his stories of Brigadier Gerard. It is no surprise that one of those tales is "How the Brigadier Bore Himself at Waterloo".

It also no surprise that the name of Waterloo is still vividly remembered — particularly, one hopes, by Sherlockians.