"It was the first announcement in the 'Found' column." [STUD] 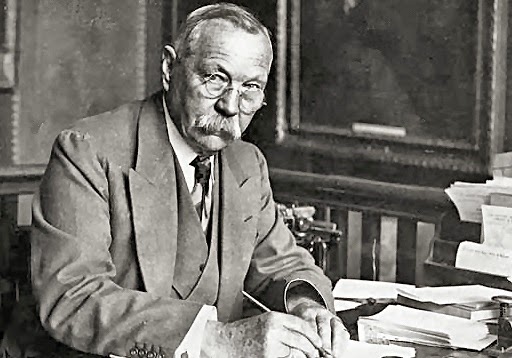 Walter Elliot, a local historian in Selkirk, Scotland, claims that he has found a long lost Sherlock Holmes story by Sir Arthur Conan Doyle. The Telegraph reported on the discovery and also published the entire story.

It is a 1,300-word tale and was originally included in a 48-page booklet called The Book o' the Brig, published in December 1903 to raise funds during a bazaar in the Scottish town of Selkirk. A local wooden bridge over the river Ettrick had been destroyed during a flood in 1902, and the town needed money to build a new traffic bridge.

The story is barely three pages long, starting on page 40, and its headline is: "Sherlock Holmes." — DISCOVERING THE BORDER BURGHS, and, BY DEDUCTION, the BRIG BAZAAR. However, there is no mention in the booklet of Sir Arthur Conan Doyle having written the story.

By using quotation marks around Sherlock Holmes the author of the story showed that this person was fictional; the detective's name was often written that way in the newspapers back then.

The bazaar went on from 10 to 12 December 1903, and each day a prominent person opened it: Lord Polwarth (Lord Lieutenant of Selkirkshire) on the Thursday, George Rodger (Provost of Selkirk) on the Friday, and Sir Arthur Conan Doyle on the Saturday — “the famous litterateur,” as he was called in the booklet, which also contained some information about the Saturday program for the bazaar.

Four days earlier Conan Doyle had given a recital of two extracts from Rodney Stone and three from Brigadier Gerard at the Victoria Hall in Selkirk. Conan Doyle showed his interest in the local bridge by declaring that the proceeds of the recital, at his own request, went to the fund for the new bridge.

The actual reason he was in Scotland at the time was that he was the prospective Unionist candidate for the Border Burghs, and between the two Selkirk events he made political speeches in the nearby towns of Hawick and Galashiels. So he had plenty of reasons to show himself generous. 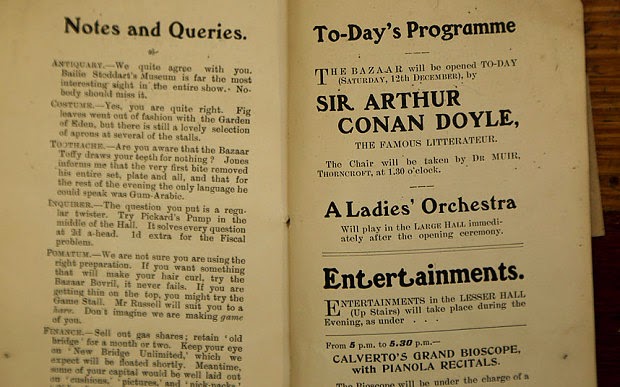 Conan Doyle's host, the Selkirkshire historian Mr. Thomas Craig-Brown, made a long introduction to the recital—everything he said was reported in the weekly local newspaper The Southern Reporter—but he made no mention of a new Sherlock Holmes story by Conan Doyle soon being published in the local booklet. It would really have been worth mentioning since Conan Doyle had started publishing new Holmes stories in The Strand Magazine earlier that same autumn.

The Southern Reporter wrote on 10 December:


"We understand that No. 1 of the Bazaar Book will be issued to-day, and will be on sale at the price of one penny. Its contents, both poetry and prose, will be found to be of a most original and attractive nature, the various articles, all more or less of a local interest, being written by our leading literary men."

No mention of Sir Arthur Conan Doyle as the author of that story. Again.

They describe the booklet as "No. 1 of the Bazaar Book," which indicates that there was more than one. This is supported by the fact that the booklet that Walter Elliot has found includes a page with the text "To-Day's Programme" and showing the program for 12 December. And most importantly, in the story itself "the great Saturday edition of the Bazaar Book" is mentioned.

On 17 December there was an advertisement for The Book o’ the Brig in The Southern Reporter: 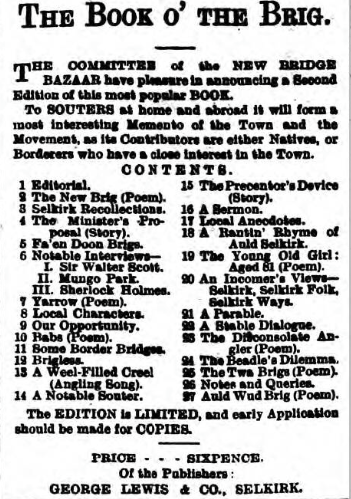 "The Committee of the New Bridge Bazaar have pleasure in announcing a Second Edition of this most popular Book.

To Souters at home and abroad it will form a most interesting Memento of the Town and the Movement, as its Contributors are either Natives, or Borderers who have a close interest in the Town."


Sir Arthur Conan Doyle was neither a Native, nor a Borderer. And the publisher George Lewis & Co. would surely have mentioned his name here, if he had been one of the Contributors. It was after all an advertisement, and advertisers were never shy of telling and selling things.

The advertisement also reveals the contents of the booklet—or rather, the combined contents of the booklets of all three bazaar days—and that gives us the best proof that the story is not by Conan Doyle. Number 6 on the list of contents is something called "Notable Interviews," and the persons interviewed are: I. Walter Scott, II. Mungo Park, and III. Sherlock Holmes.

This explains why the Sherlock Holmes story starts like this:

"'We've had enough of old romancists and men of travel,' said the Editor, as he blue-pencilled his copy, and made arrangements for the great Saturday edition of the Bazaar Book. 'We want something up-to-date. Why not have a word from "Sherlock Holmes"?'"


The "romancist" was of course Sir Walter Scott, who administered justice as sheriff of Selkirkshire. Mungo Park was an 18th century explorer of the African continent, born near Selkirk. The reason why Sherlock Holmes was chosen for the third interview was probably the fact that Conan Doyle was announced to open the bazaar. Since these three “interviews” are combined as one item in the list of contents, and there is a reference to the previous two in the Holmes text, it is most likely that they were written by the same author. And at the same time it is unlikely that Conan Doyle wrote all three of them.

The conclusion is that someone local, with at least a minor literary talent, wrote these three interviews. The lost Sherlock Holmes story is definitely a pastiche. Not an especially good one, but an early one, and a good example of how Conan Doyle's creation was used freely by other authors. For that it should be remembered, and nothing else.


[Editor's note: Mattias Boström, BSI ("The Swedish Pathological Society") is the author of Från Holmes Till Sherlock (From Holmes to Sherlock), an award-winning Swedish non-fiction book about the history of the Sherlock Holmes success, which is now being translated into English and German, and co-editor of the book series Sherlock Holmes and Conan Doyle in the Newspapers. This is his first post on I Hear of Sherlock Everywhere.]