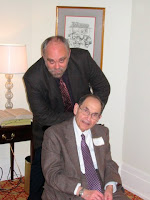 Alas, this type of news is never easy to break. Nor is it one of the tasks of this blog to which I look forward. But I believe it's a part of the responsibility I've taken on in the Sherlockian community.

Ely M. Liebow, BSI ("Inspector Gregory") passed away this weekend. For those who knew him, Ely was a deeply thoughtful and intellectual man with a superb sense of humor and a deep knowledge of Sherlock Holmes. I didn't know him well, but I did manage to raise a few glasses with him in a suite at the Iroquois Hotel some 10 or 12 years ago after my first BSI Dinner (and before the Iroquois went upscale). He was quiet in that room of rabblerousers (you know who you are!), but when he spoke, he was heard. And then there was usually heard a thunder of laughter.

In addition to the Baker Street Irregulars, Ely was a member of Hugo's Companions, the Hounds of the Baskerville and 140 Varieties of Tobacco Ash. He appeared at a number of conferences over the years and was known for his signature Sherlockian book:Dr. Joe Bell: Model for Sherlock Holmes, which has just been re-released. And the estimable Brad Keefauver has him listed at #70 on the Hundred Hottest Sherlockian Writers of the Last Century.

There is an online guestbook which you may sign for Ely's family. It will remain open until March 31, 2008.

And please, if you have any memories of Ely you'd like to share, please do so via the comments link below.

Update (4/15/07): the Chicago Tribune did a very nice feature article/remembrance of Ely on April 12th.

Update (4/16/07): Wisconsin Public Radio's University of the Air has an interview with Ely that aired on April 8, 2007. They dedicated the show to Ely's memory. It can be heard as a RealAudio file.

Ely Liebow was both a gentleman and a gentle man.
I had the pleasure of rooming with Ely for more than 15 years in New York City during BSI weekends. Those weekends were made all the more wonderful for the opportunity to listen to this well-read, socially aware and brilliantly funny man talk about everything from Yiddish humor to the history of the mystery novel, from the achivements of his three daughters to the latest doings of the Chicago Sherlockians. In between weekends, we would write and call, but mostly I would just listen. Ely made listening an honor.
Those who spent time with him in his final weeks were repeatly amazed. They went to cheer him up, but inevitably left his hospital rooom feeling lighter than when they arrived.
That's the mark of a truly caring man.
Cheers,
Ray Betzner

Ray, thank you for that heartfelt and moving comment. I knew you'd be a great resource for this.