Collectors Edition of The Private Life of Sherlock Holmes Soundtrack 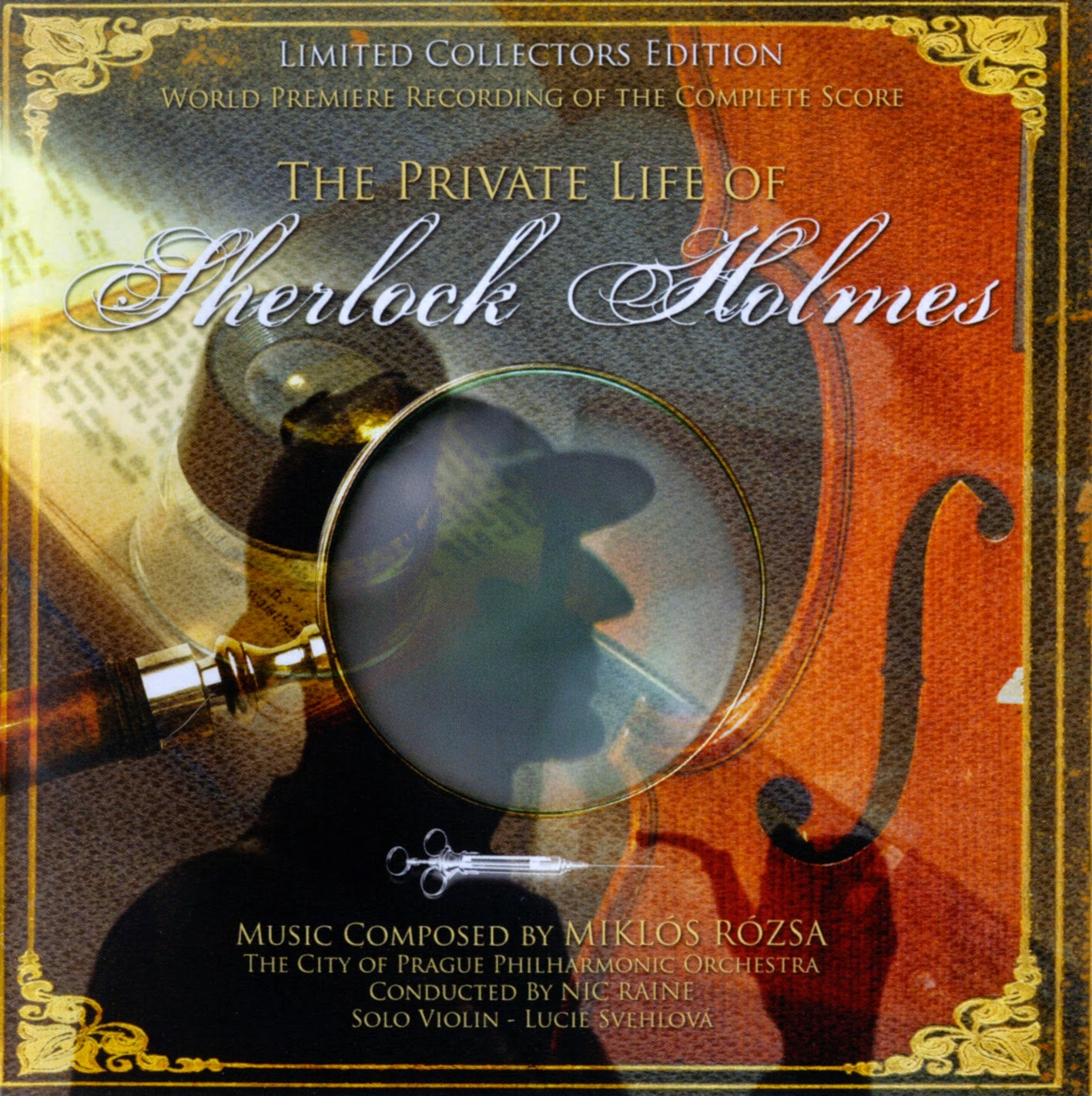 Today - April 18, 2007 - marks an auspicious occasion: the 100th anniversary of the birth of Hungarian-born composer Miklós Rózsa. To celebrate that event, producer James Fitzpatrick of Tadlow Music is releasing a limited collector's edition, the World Premiere Recording of the Complete Score of The Private Life of Sherlock Holmes (Amazon | Amazon UK).

You may recall a previous post in which we highly recommended that collectors get a taste for the full score by purchasing Rózsa's Violin Concerto, Op. 24. Composed before he scored the movie, the concerto was the closest thing we had to the full recorded score other than the title music featured in Sherlock Holmes: Classic Themes From 221B Baker Street

Now we have for the first time the definitive score, orchestrated by noted Rózsa expert Nic Raine, a noteworthy orchestrator and composer in his own right. We have previewed a copy and recommend it with our highest regard. Stick with us. This is a long, but worthwhile post to read.

While the "Classic Themes" version was at least representative of the theme, that orchestra was

tinny in comparison to what is now available from Tadlow Music. As well it should, since the music is performed by the City of Prague Philharmonic Orchestra with the same orchestral line-up that Rózsa used: 26 violins, 10 violas, 10 celli, 5 basses, 2 flutes, 2 oboes, 2 clarinets, 2 bassoons, 4 horns, 3 trumpets, 3 trombones, tuba, harp, piano, celesta and timpani plus 4 percussion. The original Rózsa sketches were obtained from Syracuse University, containing not only the complete music as heard in the film, but additional and alternate cues never used.

With over 77 minutes of music, the richness and emotion of Rózsa's score is more evident than ever. Solo violinist Lucie Svehlova truly captures the depth of loneliness, melancholy and quirkiness of Holmes through her interpretation. One can almost feel him longing for a relationship other than the cerebral, never to find it. There are alternate cues for some of the Scottish music in the film, and the original version of the main titles.

The liner notes that accompany the CD are extensive - the booklet is 24 pages long and filled with information about the life of Rózsa, notes on the cues, and details about the production of this new recording. In it, Rózsa's daughter Juliet writes:


Father was extremely overjoyed at the prospect of scoring the life of Holmes. As he says in his autobiography Double Life

, "the script had the wit, the imagination and the charm of Wilder's best films and I was certain that this was going to be the best of them all...as to the music, I enjoyed adapting my Concerto."

Billy Wilder had a grand vision for the 260-page shooting screenplay with a $10 million budget. The Private Life of Sherlock Holmes

was set to be three hours and twenty minutes with an intermission, but was drastically cut after studio executives demanded a shorter version. Wilder acquiesced, taking out what Rózsa considered some of the best material. According to the composer, what resulted was:


...two episodes were cut and hacked about in an attempt to make one story out of two. The weakest story, about a submarine disguised as the Loch Ness Monster was left intact, but elsewhere all the best bits were eliminated. The truncated film as you see it today is a sorry travesty of the original and a great disappointment to all involved.


According to the liner notes, "Wilder was devastated by the callous emasculation of his work, and returned to the screen only infrequently after that. The restoration and preservation of Wilder's original cut remains one of the highest priorities of the American Film Institute." [emphasis ours]

In the meantime, Fitzpatrick has done a remarkable job of restoring and preserving this score for our pleasure. When you order the CD, be sure to take a look at the 5-minute video clip of the recording session.

And if you'd like to read a more professional review from a film score expert, take a look at Mike Beek's review on Music for the Movies. He captures everything much better than we could. We're just here to tell you that, as a film score collector and a Sherlockian, this new CD is a must-have.

This is very good news for me; this score is good enough to stand on its own (but it helps to picture Robert Stephens' tortured Holmes when one listens to "Ilse's Theme").

Looking forward to having my own copy soon.

Why is your birthday not as important? I don't get it.