"rather more lax than befits a medical man" [MUSG] 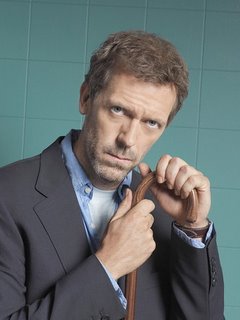 Tuesday, September 5 in the United States marks an event for which many Sherlockians have been waiting the entire summer: this evening is the season premiere of House.

Once again, it's House and Wilson as a modern-day Holmes and Watson who are teaming up to solve complex medical mysteries. In Medical Association, Newsday observes:

What began as an investigative pairing in the vein of Sherlock Holmes and his handy Dr. Watson only intensifies emotionally this fall, enriching the character byplay that's been attracting ever-greater ratings to "House" even through this summer's reruns.

"It's the Holmes-Watson thing we were hoping for," says executive producer Katie Jacobs.

This can be seen through subtle and not-so-subtle touches such as the selection of the name House (home, Holmes - get it?), the Vicodin habit (similar to Holmes' cocaine habit), the closeness with only Wilson (Watson), and House's street address of 221, with his apartment door bearing the letter B.

We'll see if we meet House's older brother this season...

Airs Tuesday, September 5 at 8:00 p.m. on Fox. Check your local listings for details.

Let me say this once, and I'll leave it alone: