For those of you who haven't had the pleasure of meeting Lee Shackleford, I can only say, "That's too bad." Lee is an avid Sherlockian and a first-rate human being. He used to illustrate "From the Doctor's Diary," a cartoon that regularly appeared in The Baker Street Journal.

As a writer, Lee has worked on Star Trek: the Next Generation, including the episode "Ship in a Bottle," in which Moriarty escapes from the holodeck computer.

One of Lee's crowning achievements (in my opinion, at least) is his play Holmes & Watson, written in 1989. It was performed for participants of the 1990 Baker Street Irregulars weeken, to great acclaim. Didn't see it that weekend? Well, the play is running again, this time at The New Play House at the Cultural Arts center in Frederick, MD. Performance dates are October 5-8, and October 12-15.

One note: at the October 14 matinee, there will be a panel after the performance, featuring a discussion with the director. A number of high-profile Sherlockians will be in attendance.

And, just to make things interesting, the play has its own MySpace profile. 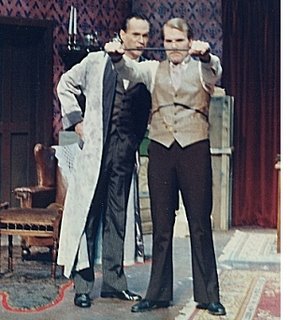