"Stand with me here upon the terrace" 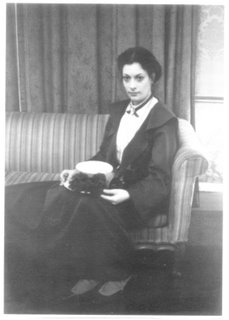 The Adventuresses of Sherlock Holmes lost an early member last week as well. Barbara Iris Van Buskirk, ASH passed away on August 30, 2006. She had a large hand in the visual cues we have from ASH today: she designed their pin and the cover of the Serpentine Muse, and helped to write the ASH's constitution.

She was a daughter of Samuel Ulan of New City, N.Y., and the late Mildred Lindenbaum Ulan.

Mrs. Van Buskirk was an accomplished craftsperson, specializing in jewelry and fiber arts and was the designer for the Center For Diversity Education. She was an art director at Bantam/Doubleday/Dell Publishers and a beloved member of Beth Ha Tephila. Barbara was a member of Mystery Writers of America and of the Adventuress' of Sherlock Holmes. She was a loving wife, mother, sister and daughter who will be greatly missed by all who knew her.

In addition to her father, she is survived by her husband of 21 years, Charles L. Van Buskirk of Asheville, daughter, Sara Merrill Van Buskirk of the home and sister, Janice Ulan of New York, N.Y.

The funeral service will be held at 2 p.m. Sunday at Beth Ha Tephila with Rabbi Robert J. Ratner and Cantor Debbie Winston officiating.

The family requests that, in lieu of flowers, memorial contributions be made to the Susan G. Komen Breast Cancer Foundation: The Komen Foundation, 5005 LBJ Fwy., Ste. 250, Dallas, TX 75244.

Morris Funeral Home, 304 Merrimon Ave., is in charge of arrangements.

Condolences may be emailed through their Web site.

And her "ASHes to Ashes" obituary from the Adventuresses of Sherlock Holmes, written by Paula Cohen, can be found at this link.