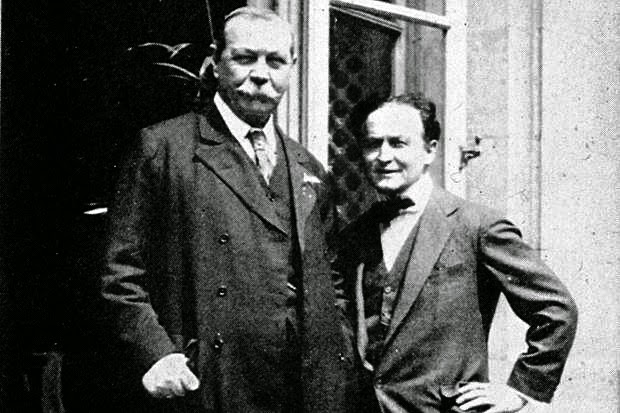 Even nearly a century later, we're still trying to come to grips with Sir Arthur Conan Doyle's foray into Spriritualism. The human mind reels at the conflict between this man of science who created the world's foremost reasoner and a man who was so naive that no reasoning could change his beliefs.

The Committee for the Scientific Investigation of Claims of the Paranormal has written up Houdini's Strange Demonstration, recounting Harry Houdini's attempt to smack some sense into Conan Doyle.

To Conan Doyle's credit, he never wavered in his belief, even after Houdini tried to debunk those into whom Conan Doyle placed his faith. But in trying to convince a true believer, Houdini was a little too vain - he didn't reveal how he accomplished the trick. He simply said, "I can assure you that it was accomplished by trickery and by nothing else."

This was incredibly short-sighted, as he was trying to coax a man out of believing in one thing that required no tanglible proof (Spiritualism) and into believing in another thing without proof. The article goes on to reveal how Houdini accomplished this feat.