Available for 30 Days: The Hound of the Baskervilles Concert Drama

“Our nerves have all been at concert-pitch” [LION] 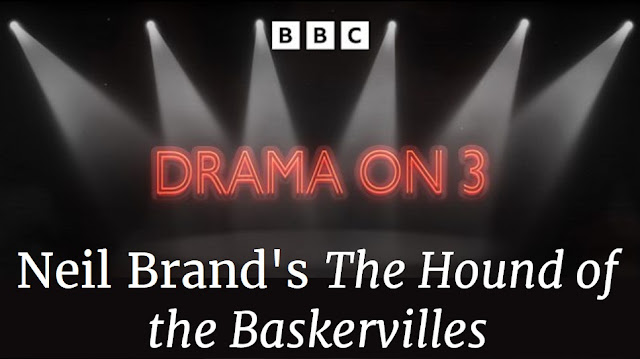 When we say "I hear of Sherlock everywhere," we really mean it.

The latest opportunity to turn your ear toward something audio-related regarding Sherlock Holmes is a new and unique production: Neil Brand's very special approach to what is probably the most famous of Sherlock Holmes stories: The Hound of the Baskervilles.

Following the success of his adaptations of A Christmas Carol and The Wind in the Willows, Neil Brand – dramatist, composer and long-term collaborator with the BBC Symphony Orchestra – has crafted a chilling, gripping and hair-raising version of this favorite tale.

This is a concert drama in three parts, adapted from Sir Arthur Conan Doyle's classic novel, in which Brand has provided the music and words, with the former performed by the BBC Symphony Orchestra and the latter by a small ensemble of actors.

In the introduction, Brand notes that he has a surprise twist for the audience, as well as one or two modern turns of phrase and "ushering in a much-loved character not found in the original story."

He also notes his musical influences:

"By chance, and to escape from the grim realities of the modern world, I spent the last three years in both the musical and literary worlds of gothic horror... I investigated the modernist composers who scored the Hammer films for a BBC Radio 4 documentary.

This score inhabits those dark realms: influenced by Universal horror scores of the 1930s and the jagged harmonies of 1950s Hammer. I've even included a homage to Hammer maestro James Bernard."

Mark Gatiss stars as Sherlock Holmes with Sanjeev Bhaskar as Dr. Watson. Recorded at the Barbican Hall, London on December 20, 2022.

The Hound of the Baskervilles is available to listen to for 30 days directly on the Radio 3 website (bbc.in/3XKhgKK) and via BBC Sounds.

Don't miss this chilling, gripping, and hair-raising performance before it's gone!

Neil Brand, orchestrated by Timothy Brock: The Hound of the Baskervilles (BBC co-commission and world premiere)