For those who were there, it's hard to believe the BSI Weekend has wrapped up.
From January 4 – January 8, Manhattan played host to some 300 or so Sherlockians who gathered to celebrate the 169th birthday of Sherlock Holmes.
Events for your editor included the unofficial kickoff with an ASH Wednesday dinner (a lively pub dinner at Annie Moore's) to the intimate and traditional Lunch of Steele on Thursday, held at the Salmagundi Club (and hosted by co-host Burt Wolder) to celebrate the life of Frederic Dorr Steele. 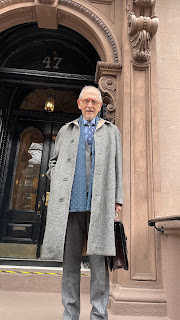 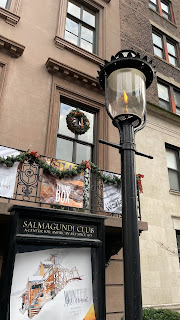 If you're interested in more about Frederic Dorr Steele, listen to Episode 204 of I Hear of Sherlock Everywhere:
ihearofsherlock · Frederic Dorr Steele
Also on Thursday, the ACD Society held its annual meeting at the Mysterious Bookshop, which this year included the running of the Wessex Cup, with 16 entered horses, all designed courtesy of Peggy Perdue. 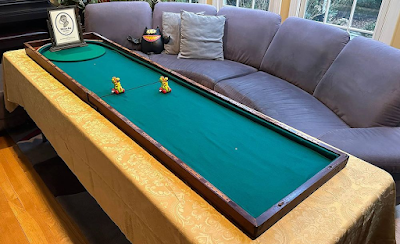 The ACD Society also had a more august role, which was the conferring of its annual Doylean Honors. 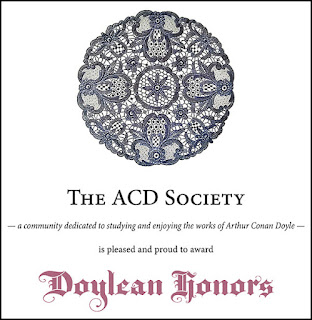 For excellence in the "Fiction and Poetry" category:

For excellence in the "Performing and Visual Arts" category:

For excellence in the "Scholarly Writing" category:

The BSI held the Distinguished Speaker Lecture on Thursday evening at the New York Bar Association. This year’s Distinguished Speaker was Lakshmi Krishnan, MD, Ph.D. Dr. Krishnan discussed the connection between detective fiction and medical diagnosis in a fascinating talk.
Dr. Krishan's presentation will be published in a future issue of the Baker Street Journal.

"Shall the world, then, be overrun by oysters?"

Sherlock Holmes, in his delirium in 'The Dying Detective,' wondered if oysters would take over the world if allowed to proliferate. He concluded: "No, no; horrible!"
Sherlockians don't like to leave things to chance, so they established S.P.O.D.E., the Society for Prevention of Oysters Destroying the Earth. This group has many local scions, but meets every year at the BSI Weekend at the Grand Central Oyster Bar & Restaurant to do its part to ensure oysters don't overrun us.
So it was following the Distinguished Speaker Lecture.

On Friday at the Gillette Luncheon, the assembled diners bore witness to the latest recipient of the Susan Rice Mentorship Award.
The Susan Rice Mentorship Award was established in 2022 to recognize the activities of a member of the Sherlock Holmes community who has been a mentor to others, in the spirit of Susan Rice.
The inaugural award went to Peter Blau, BSI ("Black Peter"). This year's award was granted to Evy Herzog, BSI ("The Daintiest Thing Under a Bonnet").
You may recall our conversation with both Susan and Evy from Episode 89 of I Hear of Sherlock Everywhere:

Plaudits From the BSI Dinner

As ever, the swirling curiosity and interest are centered on the Baker Street Irregulars annual investitures of new members. But before that, we were greeted with other substantial news.

The Woman, an honorific given to the spouse of a Baker Street Irregular was announced at the pre-dinner reception. This year's honoree was Joan Blanksteen, wife of Charlie Blanksteen, BSI ("Cavendish Square"). She was toasted and introduced by Lou Lewis, BSI ("William Whyte"), after which Joan gave her own poignant and thoughtful remarks.

Each year, one article in the Baker Street Journal (as determined by a panel of judges) is chosen for the Morley-Montgomery Award.
This year, the award was given posthumously to Nicholas Utechin, BSI ("The Ancient British Barrow") for his article "For Christ's Sake: An Evaluation of Jay Finley Christ," appearing in the Summer 2022 issue of the BSJ.
We remembered Nick with BSJ Editor Steven Rothman, BSI ("The Valley of Fear") in Episode 249 of I Hear of Sherlock Everywhere:

We were then given news of a change of leadership at the Baker Street Journal. After serving 23 years as editor of the BSJ, Steven Rothman announced he will be stepping down, but will still be on the masthead as Editor Emeritus. 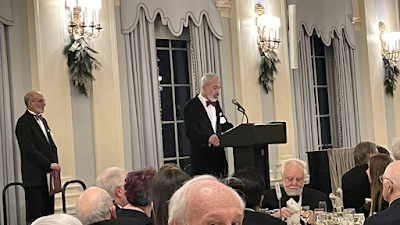 And then we arrived at the announcement of the latest investitures into the Baker Street Irregulars. Membership is granted by Michael Kean, BSI ("General Gordon"), who serves at the BSI's "Wiggins." Each member receives an investiture — a phrase from the Sherlock Holmes canon that is significant or in other ways meaningful to that person.
The BSI's Class of 2023 is:
Greg Ruby, BSI ("Bulldog Pin with Ruby Eyes") received the Two Shilling Award, for service above and beyond.
It is difficult to capture all of the activities of the BSI Weekend, due to so many small groups branching out to honor their own traditions, including named events such as ASH Wednesday, Lost in New York with a Bunch of Sherlockians, and the ASH Brunch. Not to mention other events like the Vendors Room, the BSI Luncheon.
A comprehensive report of the events will be in the Spring issue of the BSJ.
As ever, the game's afoot!
Note: all photos, unless otherwise indicated, are credited to the author
1/09/2023 02:21:00 AM
blog, BSI, bsi2023, News