"Is it forgery, coining, burglary?" [VALL]

Donald A. Redmond, BSI, who was my father, wrote something like 200 works of Sherlockian scholarship and imagination over more than four decades, and I've spent a lot of time lately working through the typescripts he left in his files. Most of his works were published in one way or another, including two full-length books; but I have been surprised to find quite a mass of material that apparently never saw print.


A number of these never-published articles are brief studies that Donald Redmond (DAR) called "Sherlockian Plotnotes," which seem to be leftovers from his research about Arthur Conan Doyle's sources for the Sherlock Holmes tales. (The central work resulting from that research was his 1982 book Sherlock Holmes: A Study in Sources.) 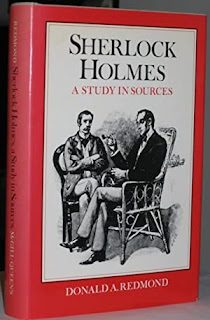 One of those Plotnotes, dated 1989, deals with "The Three Garridebs," and with the crime at its center — not the attempt to shoot Watson in front of his friend Holmes, but the counterfeiting of Bank of England notes. Here's some of what DAR wrote on that topic:

"The key plot element in 3GAR, aside from the wild-goose-chase ruse, is the cache of plates for counterfeiting banknotes. This differs sufficiently from the thirty thousand napoleons in gold in REDH, perhaps the critic will allow, permitting more freedom of locale. It has been a popular device in pastiches too."

He cites the Rathbone/Bruce film Dressed to Kill and the more recent Without a Clue.

"The pastiches," says DAR, "were not as adventurous as 3GAR — nor as the reality —for they chased after plates for pounds and fivers, whereas Rodger Prescott's notes were hundreds."
On the other hand, Prescott was a coiner as well,

"and most coining was of spurious silver — half-crowns, crowns, perhaps only shillings, worth $2 to$10 in 1980s purchasing power — which was easier to make and to pass, being so much more common. Holmes exposed one coiner, he alleged, by finding copper and zinc filings in his trouser cuffs — most unlikely, pewter (the usual material for duff coins) being composed of tin and lead. But the real money was in high­ value banknotes."

Victorian newspapers make clear that the forging industry was viable. DAR quotes from the Portsmouth Evening News of 30 January 1883:

"The manufacture of flash bank notes is being extensively carried on in the Midlands. The notes are of such good imitation that not only have commercial men been deceived, but they have been accepted by numerous local banks. The spurious character of the notes was first discovered on some being passed to the Bank of England. The police suspect that the notes are produced and circulated by a gang of clever swindlers, having agents in the principal midlandtowns."

"On Monday or Tuesday last a woman, accompanied by a respectabletradesman in Leadenhall Market, appeared at the Bank of England, and tendered to a cashier a £500 note, which she requested cash and notes for. Thenote to all appearances was perfectly genuine, and it was only by the discovery that there were no notes of that particular number issued for that amount that the forgery was detected."

"One may marvel over the fact that the Bank of England could record and keep track of the number of every single banknote; but recall that gold was the usual medium of everyday transactions, unless the amount was sizeable. Banking accounts were less common, used chiefly for cheques transmitted between firms or by persons of substantial means."

"There was a Roger Prescott, by the way, far back in English history; his line founded Lancaster, Massachusetts, and brought the Prescott name to America. There is no record of his coining or forging; perhaps the plates still lie buried."

I hope to include some of these never-published studies in a proposed anthology of DAR's writing. Details will be announced in due course.
--
10/12/2021 10:12:00 AM
blog, canon, Chris Redmond, history, scholarship