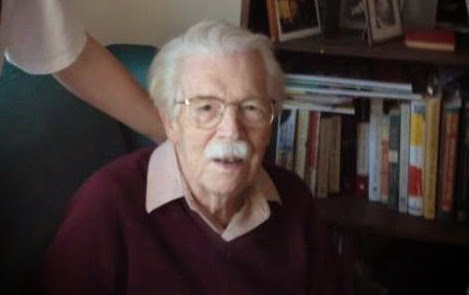 [Editor's note: The following is a guest post by Chris Redmond, BSI ("Billy")]

My father, Don Redmond, BSI, 2s. ("Good Old Index"), first read the Sherlock Holmes stories in his boyhood, and his father’s copy of the grey-­green three-­volume Conan Doyle’s Best Books sits on my bookshelf today. Indeed, he was interested enough in Sherlockian matters to buy a copy of T. S. Blakeney’s 1932 book Sherlock Holmes: Fact or Fiction? somewhere along the way. But the enthusiasm that would land him knee-­deep in Sherlockian scholarship and bring him to membership in the Baker Street Irregulars lay largely dormant until the 1960s. That was when I as a young teenager read the stories and became fascinated by all things Sherlockian, quickly getting involved to the point that my father had to come along just to keep an eye on me.

His death on October 22 in Kingston, Ontario, at the age of 92, thus ends some fifty years of Sherlockian activity that earned him both that Irregular investiture (as “Good Old Index” in 1969) and a Two ­Shilling Award, not to mention memberships and friendships in Sherlockian societies far and wide.

His writing includes dozens of articles — I hope to prepare an anthology some day — and two substantial books, Sherlock Holmes: A Study in Sources and then Sherlock Holmes Among the Pirates: Copyright and Conan Doyle in America 1890­-1930. The latter book completes the circle by including a bibliographic discussion of the Best Books volume with which my father had begun his reading decades before.

In the 1960s, I of course began writing Sherlockian juvenilia, and DAR, who was already an established scholar in the field of library administration, soon was not only advising me on my work but producing his own. Sometimes he gave his articles titles that he could straight­-facedly include in his academic curriculum vitae, such as “Some Notes on the Ceylon Problem”, an early article in the Sherlock Holmes Journal. His study “Some Chemical Problems in the Canon” (Baker Street Journal, 1964) remains a definitive explanation of Holmes’s chemical work.

With me he joined the nearest Sherlockian society, the newly organized Great Alkali Plainsmen of Greater Kansas City, perhaps largely because I was too young to travel into the big city without an adult. Famously he organized a meeting of the Plainsmen on the campus of the University of Kansas, where he was then working, and John Bennett Shaw was appalled, after travelling all the way from Oklahoma to attend, to discover that alcoholic beverages were not allowed to be served on state property.

Later, living in Ontario, he played a key role in the creation of the Arthur Conan Doyle Collection at the (then) Metropolitan Toronto Library. I recently had the opportunity to tell that story as part of a small volume, The Four Pillars, published in honor of the collection. The 1971 symposium held by the Library to launch that collection led to the creation of the Bootmakers of Toronto, and DAR was (as was I, though still young and busy with other parts of my life) an early member. When the Master Bootmaker award was created some years later, he was among the four initial recipients.


He kept up a lively correspondence, and visited Sherlockians whenever professional travel allowed, and among his effects I have found a Speckled Band of Boston necktie, not to mention sheaves of newsletters from groups I have never so much as heard of. Sherlockian printed matter that he from all quarters received is marked “indexed” in his neat handwriting, to indicate that it had found a place in the Toronto library’s “Bigelow” card index, which he maintained on a volunteer basis for decades. 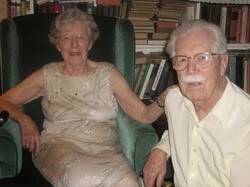 Together with my mother, Ruth, he got to know Britain’s Holmesians well during a research leave in 1977-­78 from which he brought home massive notes for what became Sherlock Holmes: A Study in Sources.

As for his reputation as “Good Old Index”, his first major Sherlockian index, covering the BSJ from 1946 to 1969, appeared in 1970, and he continued to index the BSJ, with cumulations, until 2012. Other indexes followed, knocked out on a series of manual and then electric typewriters — he never had the slightest desire to touch a computer. Bibliographies of the Arthur Conan Doyle Collection at the Toronto library were joined by Bigelow on Holmes, a cumulation of that massive card index created by S. Tupper Bigelow.

A chemistry graduate of Mount Allison University, Don Redmond went on to study library science at McGill University and the University of Illinois, and worked in library administration in Nova Scotia, Ceylon, Turkey and Kansas (where we both caught the Sherlockian bug) before becoming chief librarian of Queen’s University, Kingston, Ontario, 1966-­77. Railways, Meccano, and church administration and history were among his enthusiasms in addition to Sherlock Holmes and Arthur Conan Doyle.

His Sherlockian involvement continued after retirement, with a particular highlight being the summer “workshops” he led at Queen’s University in 1980 and 1981, which brought costumed Sherlockians to Kingston to mingle with fascinated Queen’s alumni. It would be safe to say that (although he took bibliographical and historical studies very seriously) it provided a field in which he could relax his customary dignity a little, enjoying himself and bringing enjoyment to others.


His long Sherlockian life produced a house full of books, papers, and memorabilia, some of which have come to me, while others have been deposited in the Toronto and University of Minnesota libraries or been distributed to a new generation across the Sherlockian world. A few key items, including his Irregular Shilling, will go to the Baker Street Irregulars Archives at Harvard University.

Chris Redmond, BSI ("Billy") has been a Sherlockian nearly his whole life. He is the administrator of the comprehensive and informative Sherlockian.net and he lives in Canada.
--