"the man who had produced such a remarkable impression" [CROO]

We have learned that Michael Cox, producer of the landmark Sherlock Holmes series on Granada TV, has passed away at the age of 86.

His wife Sandra passed along the news that Michael passed away peacefully on January 29 after an extended illness.

Michael Cox was born on November 28, 1934 in Bristol. He began his career in entertainment first as an actor, then as a stage manager, advertising agent, and for an artistic agency before joining the ranks of Granada Television in 1960. He literally worked his way up, beginning as a bus driver and handyman before being given responsibility for local programs and archival material.

He was tapped as an assistant director for Coronation Street in 1965 before joining other shows in the following years, such as Mr. Rose and Pardon the Expression. His fledgling experience as a producer began in 1968 with a couple of episodes of Coronation Street, followed by a proper producing career in 1972 with A Family at War and Holly.

The Sherlock Holmes connection began in 1981, when Cox realized that Granada, which already had a commitment to dramatizations of classics from the likes of H.G. Wells, Charles Dickens, Jane Austen, and Evelyn Waugh, should turn its attention to Sherlock Holmes.

According to the definitive biography of Cox by The Arthur Conan Doyle Encyclopedia,

"Cox is really the father of the Sherlock Holmes series. Without him, it would not have existed. Indeed, it was he who, a fine connoisseur and fervent admirer of Arthur Conan Doyle, realized that Sherlock Holmes' stories had finally fallen into the public domain and that the great detective had hardly been seen on television screens for ten years. He was the one who convinced Granada's management that it was possible to achieve a great success by producing a colour version of Sherlock Holmes' adventures for a new generation of spectators."

While the accountants were looking to cut expenses in any way, Cox realized the value for the Granada brand that classics afforded them. While they were never huge ratings successes, these lavishly produced dramas brought the studio respect in the domestic market and exposure on public television in the United States.

David Plowright, managing director (and Michael's boss) at Granada Television, gave Cox two conditions on which he would green-light the production: there had to be a financial commitment from an American partner before production began, and they needed someone of star quality — "Someone like Jeremy Brett," he said.

As they listed their criteria, the casting directors determined that they were unable to find "someone like Jeremy Brett" to fill the role—they could only find Jeremy Brett himself! So that was settled. As to the U.S. partner turned another lovely coincidence is that PBS's popular MYSTERY! series was produced by Joan Wilson, who just happened to be Jeremy Brett's wife.

In bringing the series to life, David Plowright provided another bit of inspiring leadership: he suggested that a full-scale replica of Baker Street be constructed as an exterior set. This iconic thoroughfare lent a great deal of realism and credibility to the Granada series over time, and is as essential and iconic as Brett himself in the title role.

The other piece of preparation that Michael Cox introduced to the production, along with associate producer Stuart Doughty and researcher Nick Cooney, was The Baker Street File. Now a collector's item, it was described as "A guide to the appearance and habits of Sherlock Holmes and Dr. Watson specially prepared for the Granada Television series The Adventures of Sherlock Holmes." There were 100 copies published in 1983 for the cast and crew of the series — photocopied typed sheets between manilla card stock. Then in 1997, Calabash Press published a paperback version. We're fortunate to have both: 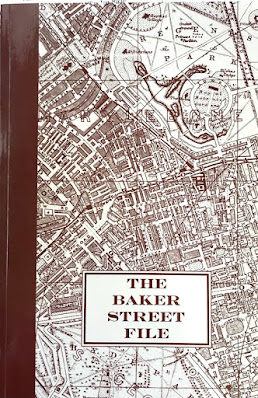 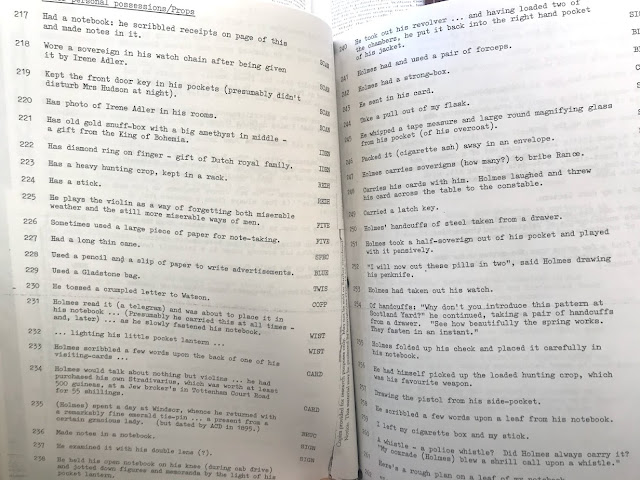 In addition to such production details, Cox also had to deal with copyright lawyers (because what would a Sherlock Holmes production be without a request from the Conan Doyle Estate?), collaborating with John Hawkesworth to develop the series for teleivions, hiring sceenwriters such as Jeremy Paul, determining which directors to use, scouting exterior locations, and securing other cast members such as David Burke as Dr. Watson and Rosalie Williams as Mrs. Hudson.

The interior set had to be designed, and Michael Grimes was the man for that. Music—such an important part of Sherlock Holmes's personality—had to be commissioned, and Patrick Gowers composed the main theme and incidental music, including period- and geography-specific pieces that were variations of the original.

The series finally debuted on ITV in England in April 1984.

Cox remained attached to the production for its entirety, through The Case-book of Sherlock Holmes in 1991. By that time, Cox was engaged as an independent producer (Granada had cut costs and eliminated a number of executive positions; by 1992, Plowright was outsted as CEO) and Jeremy Brett's health was in a precipitous decline. The age of Sherlock Holmes was over at Granada Television Cox went on to produce one more television movie in 1991: Thatcher: The Final Days.

Since that time, Michael Cox enjoyed retirement and participated in Sherlockian activities from time to time: he traveled to the United States to join the From Gillette to Brett conferences and attended gatherings of the Sherlock Holmes Society of London, which made him an Honorary Member last year (a well-deserved accolade).

His contributions to the world of Sherlock Holmes will forever be with us.