Since the introduction of Netscape to navigate the Internet in 1994 and pay-to-access services like Prodigy, AOL and Compuserve even earlier in the 1990s, the world has been moving to digital communications.

But the world of Sherlockians has traditionally moved at its own pace. In a world where "it's always 1895," as the Vincent Starrett poem goes, it's not surprising that the Baker Street Irregulars have taken their time establishing a web presence.

“These relics have a history then?”

When your editor was invested into the BSI in 2001, one of our first suggestions was establishing a web presence — at least for the Baker Street Journal, since the organization was planning to sell CD-ROMs of the BSJ's holdings from 1946-2000. It made perfect sense to sell online something that required a computer to use.

In doing so, we established and designed the site bakerstreetjournal.com, where we implemented PayPal for electronic payments, offered excerpts from previous issues, a table of contents for the current issue, and allowed subscribers to create automatically renewing subscriptions. The site first launched with the ability to purchase subscriptions, get back issues, and buy the CD-ROM. You can view what it first looked like on July 17, 2001, via the Wayback Machine. 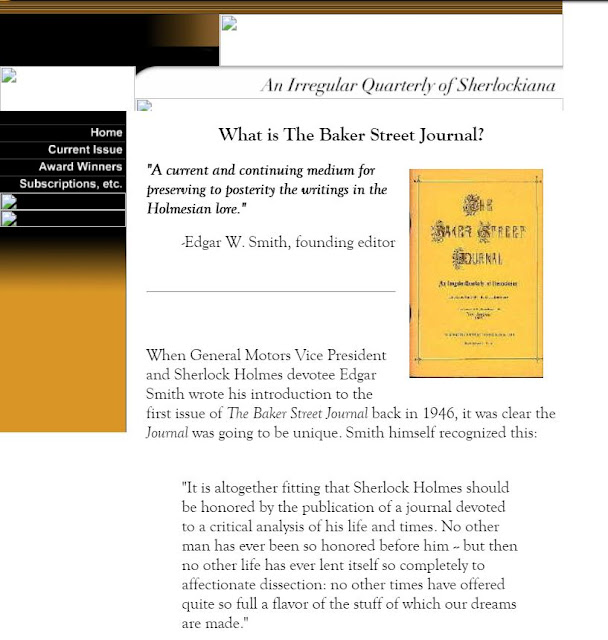 We soon added the BSI History Series, edited by Jon Lellenberg, the BSI Manuscript Series, the BSI International Series, and entire articles that won the Morley-Montgomery Award. We played with the design a bit — electing to stay with the BSJ's canary yellow theme for a while. If you go to the main Wayback Machine link, you can trace it through the years, clicking on the calendars for particular points in time. 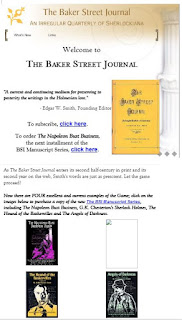 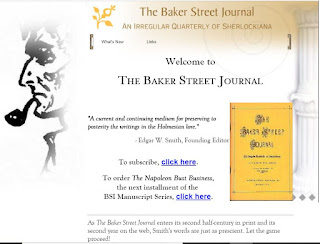 Fast forward to July, 2006 and you'll find that the site underwent a considerable overhaul. We adopted the BSI's colors of blue, purple, and mouse, and added some additional navigation. We noted that change on I Hear of Sherlock Everywhere on July 13, 2006 in the article "It Makes a Considerable Difference to Me" [BOSC]. 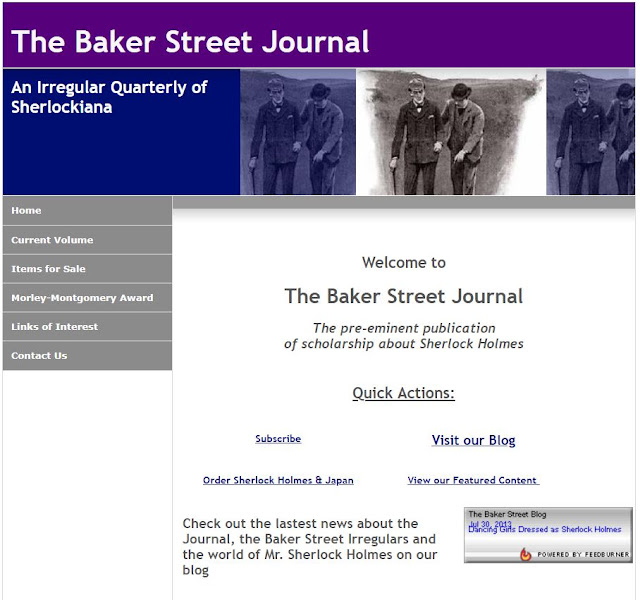 When work responsibilities became too much for us in 2008, we turned over the reins to Randall Stock, BSI ("South African Securities"), who has ably guided the site through its many updates since then. He created sections for the eBSJ, the expanded Manuscript Series and associated titles, and the events that the BSI hosts as well. It became clear in recent years that the content had outgrown the site, as the BSJ domain was doing more than simply promoting the Journal.

Not to mention the separate site that accurately and comprehensively captures the breadth of the BSI Trust, including excerpts from the BSI's Oral History project and information on every BSI Dinner since 1934. Regular visitors to our site may find the layout and navigation of the BSI Trust site slightly familiar...

Under the capable leadership of Mike Whelan as the BSI's "Wiggins," the Baker Street Irregulars have flourished in the last 20 years. The BSI Trust was established to house the BSI's archives and historical material, which has now found a new home at the Lilly Library. The BSI Press has become a publishing powerhouse, with over 60 titles in an ever-expanding set of categories. The BSI Weekend is much more than a weekend, and involves many satellite events stretching from Wednesday to Sunday of the "weekend." Plus, the BSI holds events that are more along the lines of expeditions every few years. And of course, the BSJ continues on its heralded quarterly schedule.

With so much information to convey, it became clear that the BSJ site couldn't continue to shoulder it all; and frankly, the site was much more than just the Baker Street Journal — it was doubling as the BSI's website.

And with that, Randall and team worked tirelessly over the last year or so to design and build the new Baker Street Irregulars website at bakerstreetirregulars.com.

If you head over there, you'll see a clearly laid-out page that has links to sections like BSI Books, including a number of series: Manuscript, International, Events and Expeditions, Professions, History and Biography, and more. There's a section for BSI Events, including the BSI Weekend and other special events and expeditions. And of course, the BSJ has its own section as well. The BSI Trust will continue to be maintained as a separate site.

As with the initial launch of the original BSJ site in 2001, this is a first pass. We're sure there will be improvements along the way. But the clarity that it brings to the Baker Street Irregulars brand is encouraging.

The time was right — actually, it was downright overdue — to inform the world of all of the wonderful things for which the Baker Street Irregulars are responsible. We hope that, through the hard work of everyone associated with this project, Sherlockians everywhere will appreciate the tireless and unyielding work of keeping green the memory of Sherlock Holmes.