"In glancing over my notes" [SPEC] 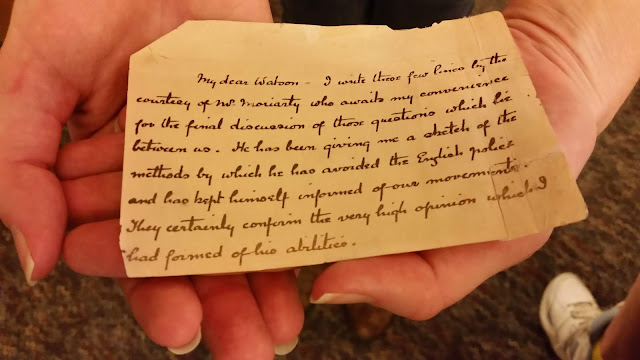 Since we began the I Hear of Sherlock Everywhere audio program (or podcast, if you will) eleven years ago this week, we've been thrilled with the variety of guests and topics we've been able to host.

And each episode, we attempt to provide a set of show notes that round out the listening experiences: a brief summary, time stamps for various parts of the conversation (when we can), sponsors, links to topics covered, and ways to rate or review the show, get in touch with us, and provide monetary support.

But more recently, we added something that we've wanted to include for some time: transcriptions.

"transcribing my own letters" [HOUN]

We've long wanted to offer transcriptions, but the technology that provided them was immature, too expensive, or the post-transcription editing process required too much time. As the monetary support for the show has grown, we've taken the leap—despite being short on funds—to have each show transcribed (more on that in a moment).

We have a number of followers who have hearing issues, and they expressed an interest in the show, but also voiced their frustration in not being able to follow along with a transcription. So we made it our priority to find the right vendor and get this done.

If you go to the Show Archives page, you'll be able to see which episodes have been transcribed to date: there is a red asterisk associated with those that are complete. We are working our way through the backlog.

We pay per minute of show, so we need to account for the expense of transcribing them—particularly the longer ones. We have Patreon and PayPal set up to make it possible to accept funds.

Patreon works like an ongoing support plan—much like monthly NPR or PBS support works. We simply charge patrons per show that we produce; if you don't produce a show, patrons aren't charged. We need to reach the $100 per episode level to make transcriptions affordable. We're currently $33 per episode short of that goal.

Below is a sample transcription from a recent episode. While it doesn't contain the musical cues or sound clips and sound effects, it should give you a sense of what we discuss.

Won't you join others in making IHOSE accessible for more Sherlockians around the world? Consider becoming a supporter on Patreon or PayPal today.