A Look into the Splügen Pass


"it happened in the Splügen Pass" [ILLU] 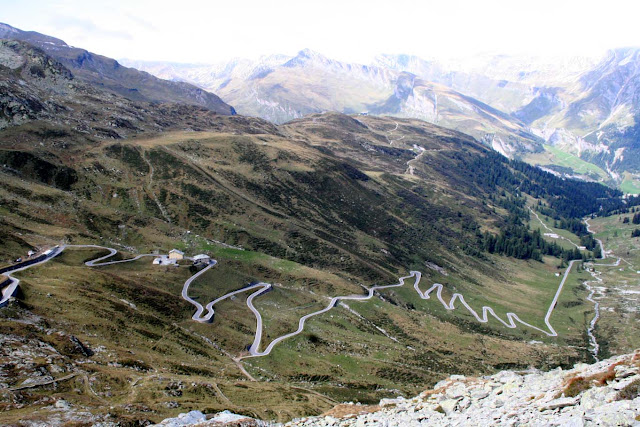 When we're reading the Sherlock Holmes stories, it's always gratifying to identify true locations and actual landmarks, as opposed to those that Watson cleverly hid from us. And there are really three levels of identification: 1) inability to definitively locate a building or setting; 2) ability to take Watson's clues and descriptions and use Holmes's own methods to make an identification; and 3) a flat-out undeniable real place.

For example, the exact location of 221B Baker Street has been disputed for years, made even more difficult by the destruction of pre-World War II buildings. It falls into the first category.

The second category would include places like Camford (in "The Creeping Man"), or Groombridge Place, the house that was correctly identified as Birlstone Manor from The Valley of Fear. James Montgomery, BSI ("The Red Circle") managed to correctly identify the setting, years after H.W. Bell, BSI ("The Valley of Fear") had submitted what was thought to be the correct identity.

The third category is what gives the Canon its realism. It's one of the reasons that "the Game" makes sense: because Sherlock Holmes was thrust believably into our world. He lived in our city. He walked our streets.

So when we read of a location where we can say, "Hey, I know that place!" (or more appropriately, as Watson noted when Holmes described Sussex: "I know that country, Holmes." [SUSS]), we get an even greater sense of satisfaction and of connection with the stories. Examples might include the Reichenbach Falls, Waterloo Station, or the Simpsons – places we can still visit today.

So upon reading about the Splügen Pass in "The Illustrious Client," that's enough to send one to the Encyclopedia Sherlockiana or Wikipedia:


"I am as sure that he killed his wife when the so-called ‘accident’ happened in the Splügen Pass as if I had seen him do it."

That passage of course refers to Baron Adelbert Gruner. you've ever wondered about the Splügen Pass, here's your opportunity to learn a little more.

The Splügen Pass is a high mountain pass that marks the border between Italy and Switzerland. At its highest, it stands 6,945 feet (2,115 meters) and is recognized as the separation of the Western and Eastern Alps.

The pass was already in use in the Roman era, and from 1818 to 1823 the modern road was built at the behest of the Austrian authorities. In 1840, author Mary Shelley traveled through the pass on the way to Lake Como with her son. She describes the pass in her travel narrative, Rambles in Germany and Italy, published in 1844:


"A few years ago, there was no path except across this mountain, which being very exposed, and difficult even to danger, the Splügen was only traversed by shepherds and travellers of the country on mules or on foot. But now, a new and most marvellous road has been constructed - the mountain in question is, to the extent of several miles, cleft from the summit to the base, and a sheer precipice of 4,000 feet rises on either side. The Rhine, swift and strong, but in width a span, flows in the narrow depth below. The road has been constructed on the face of the precipice, now cut into the side, now perforated through the living rock into galleries: it passes, at intervals, from one side of the ravine to the other, and bridges of a single arch span the chasm. The precipices, indeed approach so near, in parts, that a fallen tree could not reach the river below, but lay wedged in mid-way. It may be imagined how singular and sublime this pass is, in its naked simplicity. After proceeding about a mile, you look back and see the country you had left, through the narrow opening of the gigantic crags, set like a painting in this cloud-reaching frame. It is giddy work to look down over the parapet that protects the road, and mark the arrowy rushing of the imprisoned river. Mid-way in the pass, the precipices approach so near that you might fancy that a strong man could leap across."

Sounds like the perfect place for an individual like Baron Adelbert Gruner to send his wife to her death.

A few years ago, the forum for Italy Magazine had a thread on the Splügen Pass, that territory between Italy and Switzerland. It's clear that over the years, the region has retained its 'sinister air':


"What a grim seeming place!! We never saw a single human there nor all the way down to Chiavenna. The road twists and turns thro' innumerable tunnels with many hairpin bends inside the tunnels and water dripping everywhere and the sound of falling stones."

Should you chance to pass through the Splügen Pass, take care. You don't want to end up in a scrapbook...

Hairpin turns on snaking roads inside unlit tunnels seems to be a favorite feature of the drivers who've tried it. Just the thing on a motorbike! In the dark. In the rain. On the handlebars.