Pigging Out on Sherlock Holmes

"It's surely time that I disappeared into that little farm of my dreams." [CROO] 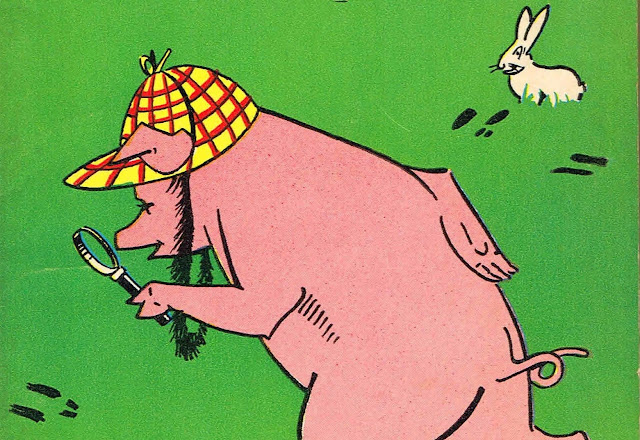 It was upon the second weekend of November of last year that I found myself in the venerable though comfortable quarters of the Gananoque Inn, a few minutes' drive from the American border, settling in to talk about… pigs.

There were about 18 of us, members of the Friends of Freddy, from both sides of the border, demographically and temperamentally a lot like Sherlockians, and quite prepared to spend a day and a half chatting about Freddy (the pig), Jinx (the cat), and the other anthropomorphic animals who figure in 26 books written by Walter R. Brooks between 1927 and 1958. There was a time when ten-year-olds stormed public libraries every Saturday morning looking for the Freddy books, and they're now considered excellent reading-aloud material. The Friends of Freddy are mostly of an age to remember reading the books when we were children, and seek to promote them to new generations.

I found myself on the convention's program to give a half-hour talk under the title "Two Great Detectives: Freddy and Sherlock Holmes." Mostly I was sharing a few thoughts about one of the 26 books, Freddy the Detective, which I consider to be the best of the series. I'm not sure, after all these years, whether I first liked Detective because of my enthusiasm for Sherlock Holmes, or whether I got interested in Sherlock Holmes because of Detective.

As the story begins, Freddy the pig is shadowing his fellow animals on the Bean farm. "I got the idea," he says, "from a book I found in the barn, The Adventures of Sherlock Holmes. It's the best book I've come across in a long time, and you'll admit I know something about literature."

He finds himself working to solve a real mystery when the toy train belonging to the human boy and girl on the farm disappears. He unearths clues, including green paint scratches and grey hairs, and eventually brings the crime home to the perpetrators, old Simon the rat (Freddy's Moriarty) and his criminous family. It takes a while, though: "Even Sherlock Holmes couldn't do everything in a minute," Freddy tells Jinx defensively. There are, of course, complications and subplots, including the appearance of a "city detective," provocatively named Montague Boner.

Freddy the Detective was published by Knopf in 1932. It was the third book in the Freddy series, but the first to set what became a pattern in the ensuing two decades with Freddy the Magician, Freddy Goes Camping, Freddy the Pilot, and so on. There have been a number of subsequent editions of Detective, and it is now in print from Overlook Press.

As I did a little research to prepare my talk for the Friends of Freddy, I realized that Detective's appearance in 1932 was no coincidence. The death of Arthur Conan Doyle in 1930 had led to publication of Doubleday's two-volume The Complete Sherlock Holmes and a burst of new interest in Sherlock Holmes. William Gillette was winding up his final "farewell tour" as Holmes, which had begun in 1929. Sherlock Holmes' Fatal Hour, starring Arthur Wontner, had been released in 1931, and The Speckled Band with Raymond Massey followed. In Britain, three books of general Holmesiana had appeared by 1932, including T. S. Blakeney's immortal Sherlock Holmes: Fact or Fiction?

In fact, 1932 was the peak of the third "Sherlock Holmes boom", after 1892 and 1902, and in that context, it's no real surprise that Brooks seized on a prominent figure in popular culture to give his pig book extra appeal. It is by no means a traditional pastiche, but it can easily be classified under the umbrella of fanfiction — Farmlock?

As for Walter R. Brooks, he continued writing until his death in 1958: not just the Freddy books, but scores of short stories for the adult market, published in the Saturday Evening Post and many other magazines, as well as one novel, Ernestine Takes Over. His best-known legacy, apart from Freddy, is the talking horse Mister Ed, the central character in a dozen short stories that led to a television comedy series in the 1960s.