"An intricate and elaborate calculation." [DANC] 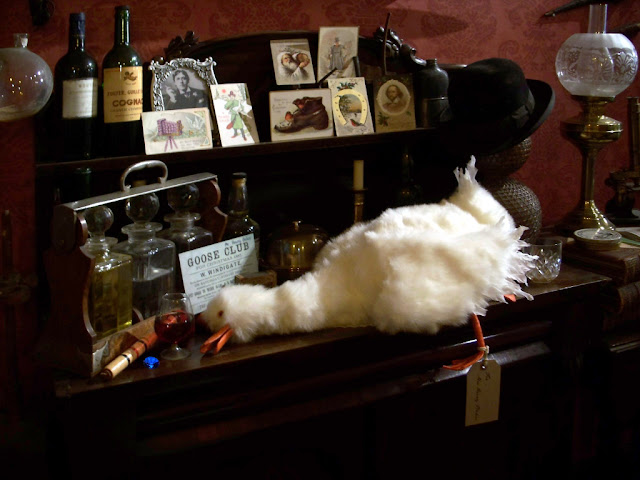 Now that the holiday season is behind us and the inevitable bills begin to roll in, it's an appropriate time to think of money. For example, that Christmas goose in "The Blue Carbuncle" cost 7/6 (that's seven shillings and sixpence, or 37.5 pence in decimal currency) at wholesale, and 12 shillings (60 pence) at retail. In 2017, it's not so easy to buy a Christmas goose (let alone one that includes "the feathers, legs, crop, and so on") but Butterball turkeys were on sale for $1.99 a pound at my local supermarket.

We might conclude that 12 shillings in the early 1890s corresponds to $40 (for a 20-pound bird) today. But that equivalence is valid only if you can get the turkey on sale. The regular price is $4.39 a pound, some $88 for the 20-pounder, and a little arithmetic indicates that one pound (£1) in that era was worth more like $146 in today's money. I'm talking Canadian dollars, of course.

The figure is only an estimate, but to somebody who has been dabbling in the minutiae of 1895 for a long time now (i.e., me), they seem about right. In fact let's say $150 in today's Canadian dollar, or $120 in US dollars, for each £1, each golden sovereign, spent or earned by the people among whom Sherlock Holmes moved.

These numbers are more than double what I proposed when I first wrote about the value of Victorian currency in "A Sherlockian Visits the Currency Exchange," published in Canadian Holmes in 1986. At that time I suggested a rule of thumb of $70 for each £1. Later I hiked the figure to $100 — and let me repeat that these are all hand-waving estimates, not precise determinations.

Apply the $120 (US) figure to some other prices and what do you get? The shilling paid to each Baker Street Irregular would be $6. That dress bought for Madame Derbyshire in "Silver Blaze", priced at 22 guineas (23 pounds 2 shillings), would be $2,800 — "expensive tastes" indeed. Eight shillings for a bed, and 8d (eightpence) for a glass of sherry, in "The Noble Bachelor" would be $48 for the hotel room, $4 for the drink. Both figures seem a little low, but bear in mind that the hotel room had neither air conditioning nor colour television, probably not even a bathroom.

What about incomes? Violet Hunter's £100 a year becomes $12,000 plus room and board, not bad at all. Neville St. Clair was naturally happy to take in 26/4 ($158) a day as a beggar, having earned just £2 ($240) a week as a journalist — well below most minimum wage levels these days. Other than Jabez Wilson, earning £4 or $480 a week at his sinecure, incomes were, in fact, far lower in the Victorian era than they are today. To put it another way, standards of living have risen, allowing far more people to buy houses, own personal electronics, and pay income tax (the rate in Victorian Britain was 2.5 per cent, with incomes under £150 exempt altogether).

I have to repeat that there is no precision in this sort of calculation, but it gives a hint of what's implied by Watson's wound pension of 11/6 a day, Victor Hatherley's fee of 50 guineas for a night's work, or Mary Maberley's trip round the world on £5,000.

Further analysis will be forthcoming, and may possibly take into account John Clay's French gold, the rates offered by London's American Exchange (mentioned twice in the Sherlock Holmes tales), and the bimetallic question.