"At the Lyceum Theatre, the crowds were already thick" [SIGN] 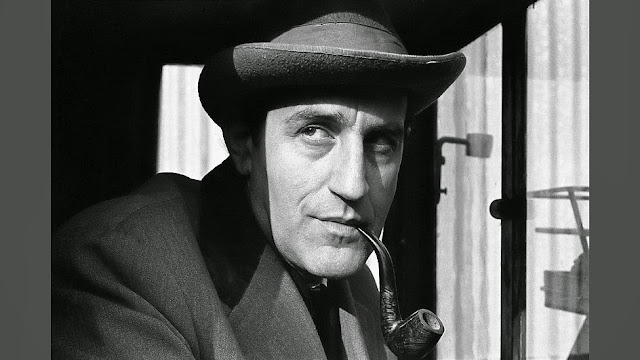 Douglas Wilmer, BSI ("The Lyceum Theatre"), who portrayed Sherlock Holmes on the BBC in the 1960s, passed away after a short illness today, aged 96. He received his investiture in the Baker Street Irregulars in 2000.

Douglas Wilmer's mark on the Sherlockian world cannot be overstated. For an entire generation of British television viewers, he was Sherlock Holmes. Wilmer had the same impact that Jeremy Brett did in the mid-1980s and early 1990s and that Benedict Cumberbatch has today.

Just a little over a year ago, we reflected on 50 years of Douglas Wilmer as Sherlock Holmes, which included a nod to the 2014 Baker Street Journal Christmas Annual, edited by Jonathan ("Barrymore") and Elaine McCafferty ("Eliza Barrymore"), BSIs. The volume's titled came from longtime Sherlockian entertainment critic David Morrill, BSI ("Count Von Kramm") who called him "The only actor who ever got it right." [Listen to David's take on Sherlock Holmes of the screen on Episodes 21 and 22] 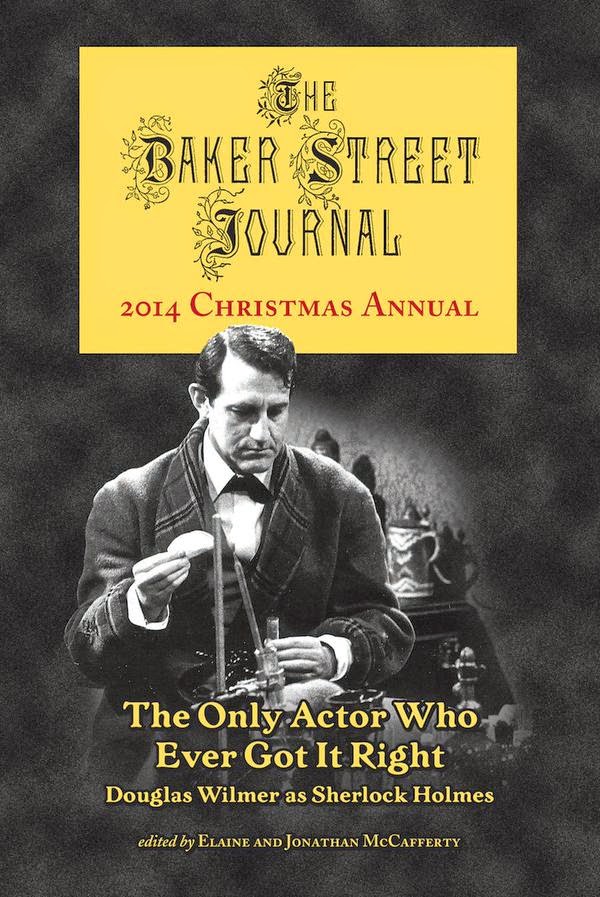 That remembrance also included some wonderful photos of Wilmer's trip to the Sherlock Holmes exhibit at the London Museum — do be sure to click through.

For our part, we'd like to share some personal memories about Douglas. In 1998, Douglas made a tour of some American cities to promote his audiocassette recordings of some Sherlock Holmes stories. Your editor was fortunate enough to be the ambassador who accompanied him in Boston (more on that anon).

But since that trip, we fell into a bit of a correspondence together. After learning about Douglas' love of watercolors, your editor picked up a set of notecards at a museum shop, and subsequently every letter we sent off to Douglas were on those cards. And for every note sent, he was diligent about replying. We'll treasure those few missives greatly and we'll miss Douglas the man even more.

Below, we reproduce our contribution to The Holmes and Watson Report, Vol. 2, No. 4 (Sept. 1998) titled "Sherlock Holmes In My Car." We've included additional assets to bring the story to life.

Sherlock Holmes In My Car

Monday, April 20, 1998 dawned like any other day. As the sun began to rise effortlessly over the Boston Harbor, school buses were hauling their cargo from Copley Square to Hopkington, some 26.2 miles away. However, these buses did not contain the usual assemblage of screaming schoolchildren. You see, this was no ordinary day: this was the day of the Boston Marathon.

The Great Race is always held on Patriots’ Day – the day that Massachusetts celebrates Paul Revere’s midnight ride and the beginning of the Revolutionary War. What better day to welcome an Englishman to Boston, home of the Tea Party and the Shot Heard ‘Round the World?

“It is always a joy to meet an American.” [NOBL]

Approximately four months before, I received a call from Paul Singleton, BSI telling me of Douglas Wilmer’s impending visit to the United States. He would be visiting Boston, New York, Philadelphia, and Washington, D.C., in that order. Paul had been told that I was the contact person for the Boston area. Well, I couldn’t very well tell Paul that I was a mere cog in the well-greased Sherlockian world in the Hub of the Universe, could I?

I listened intently to the plan of action: Mr. Wilmer would travel with his wife and Richard Lancelyn Green, visiting with Sherlockian societies along the way. The program? It seems that Mr. Wilmer wished to sing for his supper, and therefore would be prepared to read from the Canon.

“Ha! Nothing could be better!” [STOC]

Preparations were made. Phone calls were placed. Dossiers and packages were received. I was to pick up Douglas, Anne and Richard at the airport. And before I knew it, the evening of April 20 was upon me. I successfully navigated the Big Dig and the constant construction at Logan Airport, where I stood in line at the international arrivals gate, awaiting my quarry.

"How shall I ever forget that dreadful vigil?" [SPEC]

As soon as the party rounded the corner, I recognized my party. At 78, Douglas Wilmer is as spry as ever, just as Holmes was at that age. I held up my chauffer-esque sign that on one side read “WILMER.” On the other side was hastily scrawled “Ugly 6’3” murderer at keyhole,” a scene Wilmer had created in The Adventure of Sherlock Holmes’ Smarter Brother. Rather than scare him enough to retreat to the Customs counter, I shared this with him later, and he recalled the scene with great amusement.

"He glanced swiftly over it." [HOUN]

The scene in question begins at 3:35


As we drove to his lodgings, I shared the information of the Boston holiday with my guests and we all agreed upon the irony. I assured them that we Yanks would nevertheless make their stay a most pleasant one in Boston. The Algonquin Club of Boston, one of the oldest and most revered clubs in the city, was a perfect choice for my guests’ accommodation, since it was modeled after gentlemen’s clubs in London. In fact, Mr. Wilmer announced that it could double as the Diogenes Club.


After checking in and depositing bags, I found that the Wilmers and Green were in the mood for some good American food (i.e., burgers!). We zipped from Commonwealth Avenue over to Newbury Street, where we found a parking space directly in front of our restaurant. I informed them that this was a rarity in the entire city, even more so on Newbury Street, and even more so only hours after the completion of the marathon. They didn’t seem fazed. I guess it doesn’t mean as much to any non-Bostonian.

Well, I could go on and on about the minute details of Douglas Wilmer’s stay, but I’ll keep it brief rather than risk losing some of the loyal readership of this fine publication. Suffice it to say that I was informed that Mr. Wilmer enjoyed art and architecture, both of which Boston happens to have on hand, fortunately. Douglas, Anne, and Richard got their fill of the city, including the Museum of Fine Arts, the Isabella Stewart Gardener Museum, the Boston Common, and Legal Sea Foods.

The event itself was a rousing success, with 50 people in attendance at the Alqonquin Club and a feast for the eyes as well as the mouth, as my good friend John Baesch as described. Wilmer’s performance was one to remember and was very well-received by the audience. All in all, the evening was a smashing success. 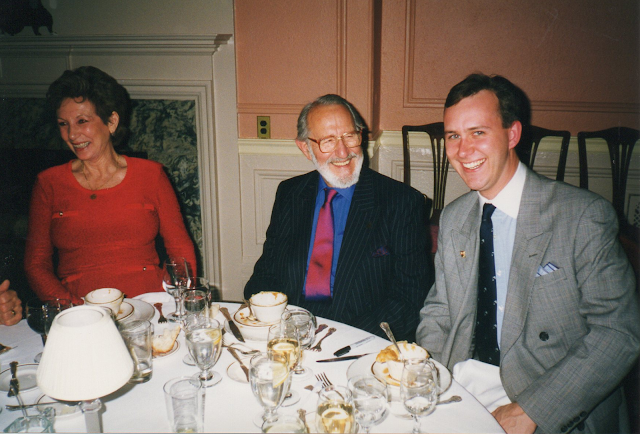 Amidst all of the excitement of the event and the frantic preparations, the thrill of the entire week was just talking quietly with Douglas – as he asked me to call him – and learning more about his life. There were times we chatted together at my club, in my apartment, and in my car. As I was driving through the streets of Boston, I thought to myself at one point, “My God! Sherlock Holmes is sitting in the passenger seat of my car!”

I learned that Wilmer greatly admired Leo McKern, an actor of great range and skill. I discovered that Laurence Olivier had stage fright that sometimes caused him nausea. I found that Douglas himself was a war hero, watercolor artist, a bird watcher, a former wine shop owner, and couldn’t get enough of our Boston baked scrod. 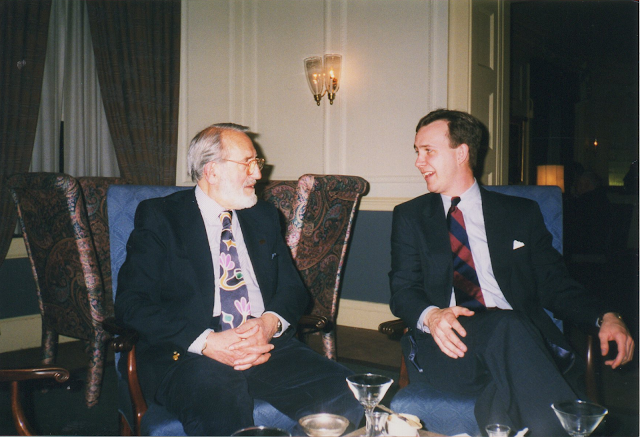 As a host, I constantly fussed and tried to ensure the comfort of my guests. I could only hope that I succeeded all week. As we prepared to part, Douglas and Anne pulled me aside and gave me a neatly wrapped gift. I opened a folio edition of The Fire of Liberty, inscribed “Best Wishes & Thanks, Douglas Wilmer.” When I add to this a letter in May from Suffolk that ran “…we could not have got off to a better start…I can’t imagine a better introduction to America!”

I am satisfied with a job well done and a few days of memories that will last me a lifetime.

“Those are the facts of the case, Doctor, and if they are of any use to your collection, I am sure that they are very heartily at your service.” [GLOR]

Rest well, Douglas Wilmer. You inspired us more than you knew. 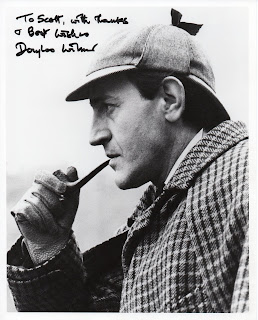 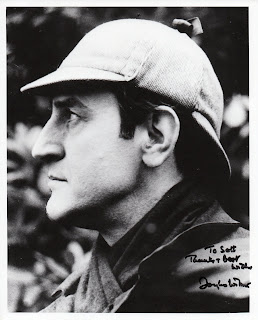 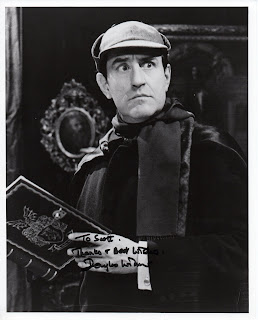