Elementary and the Hound 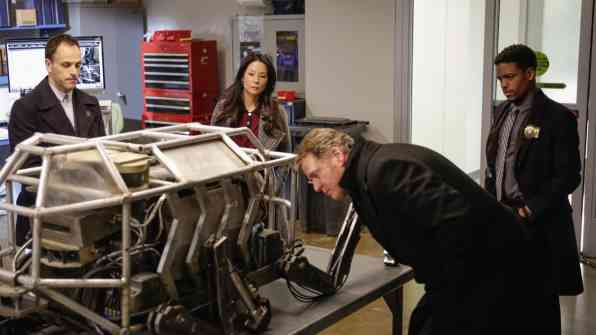 From the beginning, Elementary was not about retelling the Arthur Conan Doyle Canon in the 21st century. At San Diego’s Comic Con in 2012, Executive Producer Rob Doherty said,


"We’re not looking to contemporize the old stories. Really, when I look at the source material, what I love and have always loved is the relationship and the mythology. I love those aspects.  The cases are brilliant, don’t get me wrong, but it’s not our first order of business. If somebody had a take on one of the stories and it seemed right for our show in New York, with our Sherlock and our Watson, I’m open to it but it’s not our plan for the show.  We want to tell our own new Sherlockian mysteries week in and week out."


The show runners have taken familiar Canonical tropes and tropes created by Sherlockians within the Grand Game since the 1930s, such as Irene Adler being Holmes’ great love, and turned them on their heads: Watson weaning “him from that drug mania which had threatened once to check his remarkable career” [MISS] then becoming his friend; the great platonic relationship across genders; Holmes’ greatest love is also his greatest enemy.  These changes work for me, exploring the characters of Holmes and Watson in new, interesting, and for some, jarring ways. Other changes, such as Sherlock’s sex-as-exercise, I feel are misfires, but all-in-all Elementary is a thoughtful, well-written and acted examination of what it means to be Sherlock Holmes and John (in this case Joan) Watson.

When Elementary does partake of Canonical material, it can do so in ways that frustrate the expectations of some, but, when successful are fascinating. Season 1, Episode 9 (S1 E9) “You Do It to Yourself” used the plot of “The Problem of Thor Bridge” without name-checking any characters or locations from the story. That left some to miss the connection between the story and episode entirely, and others to assume that the showrunners are so ignorant of the Canon that they didn’t know the source of the plot; an assumption belied by Sherlock name-check THOR as a case of his in England (S1 E21 “A Landmark Story”) and the use of Maria Gibson’s suicide method (S2 E9 “On the Line”) by a young woman attempting to frame her sister’s killer. In fact the dumbbell used as a weight to pull her gun off the bridge into the Hudson River is momentarily framed as Thor’s Hammer.

Elementary has taken parts of the Canon and its characters, such as S3 E2 “The Five Orange Pipz”, S1 E12 “M.”, S2 E7 “The Marchioness”, S1 E20 “Dead Man’s Switch”,  the two-parter S3 E11 “The Illustrious Client” and E12 “The One That Got Away” and worked them into the show’s mythos, but its best Canonical retelling is S2 E17’s “Ears to You” which not only repurposed "The Cardboard Box" into the 21st century but worked it perfectly into the show’s procedural and addiction recovery formats while staying true to Doyle, and the story itself.  The series has finally gotten around to The Hound of the Baskervilles and within the confines of one hour managed to coherently condense the novel’s plot while substituting the desolation of Dartmoor to the morally bleak landscape of American commerce, one of the series’ touchstones and replacements of the Canon’s Victorian England class system.

Broadcast on March 10, 2016, S4 E16’s “Hounded” is the last episode on Thursday nights this season; the show moved to Sundays on March 20. The Hound of the Baskervilles is the most well-known and most filmed stories of the Canon. Part of the novel’s success is the Gothic, supernatural setting in which the rational, scientific Holmes must restore order. Not every film version has done visually what Doyle did with words, and even with a two-part episode, Elementary would probably fail in capturing the chills and thrills of the novel. Instead, Robert Hewitt Wolfe’s script hues close to novel, paring it down to essentials. All this takes place in the ethical morass of business, commerce and technology, an Elementary staple backdrop, befitting a detective working in the world’s financial Grimpen Mire.

Venture capitalist Charles Baskerville is hit by a truck after falling off a jogging path. His brother Henry, the last known surviving heir to Gilded Age railroad tycoon Hugo Baskerville’s fortune, doesn’t believe that it was an accident and asks Holmes and Watson to investigate. At the scene in Central Park, Sherlock deduces from the broken branches and twigs that Charles was chased to his death by someone who was wider with a lower stance and there was a third person who witnessed it and ran away. Sherlock sends Joan to find the witness while he tends to the shows' B-story; the scene plays like a version of Holmes volunteering Watson to guard Sir Henry. The witness, a homeless vet who, while in an alter state or two, saw Charles chased by small bear or large wolf that glowed like a lantern. Here the show respects the source material by not trying to shoehorn “Mr. Holmes, they were the footprints of a gigantic hound!” into 2016 New York City. In fact, the word “hound” is never mentioned in the show.

At Charles’ company, Baskerville Genetics, we meet a red herring in the form of Cornwall, a large genetically-modified bioluminescent dog. Dr. Jane Mortimer (so named in the script, but I don’t believe her name was mentioned during the episode) direct Sherlock and Joan’s attention to a convict named Selden, who was sending death-threat emails to Charles and others at the company. Selden, played to crank perfection by obese actor Ric Stoneback (could the show's Selden's first name be "Franklin"?), while happy at the karmic justice at Charles death has an alibi, “I was at a comedy club with my sister. Big mistake. I was the target of every bozo on stage. Fat-shaming is the last acceptable prejudice in America!” And perhaps a meta-comment on Victorian Mycroft in “The Abominable Bride”. Selden leads them to a competitive genetics firm, one which activities are a bit shadier that making drought-resistant rice—that of breeding “war dogs” for the Army Research Laboratory. Fortunately for society, the project produced stillborn or nonviable dogs and was abandoned. However, the competitor tells the detectives of Charles’ “patent-jacking”—giving start-up companies capital in exchange for stock and seats on the board and once he had a controlling interest, liquidating the company and selling off its assets, including any patents.

Here’s where the casting of the likable and sympathetic Tom Everett Scott in the thankless role of Henry Baskerville (can anyone remember and name another of the many actors, aside from Christopher Lee, who played the role?) pays off; he knows about Charles patent-jacking, but thinks the 30 or so inventors were “well compensated” and have nothing to be vengeful about.

“Imagine,” Sherlock has to tell him, “you’re one of the inventors your brother fleeced. Imagine watching your brother make millions off your brainchild while you were forced to walk away with $100,000 and a hearty handshake.” The viewer still roots for Henry to survive the inevitable. While still on the phone with Sherlock, the beast breaks into Baskerville Hall, by hearing the beast’s growl Sherlock is able to deduce what the beast is and save Henry’s life. It turns out to be a four-legged robot (“Only slightly less outrageous than the glowing mastiff, wouldn't you think?” says Sherlock in another bit of meta-commentary) cobbled together from stolen patents and sold to the Baskervilles’ cousin Rodger Stapleton. One of the ten robots built for the military by Stapleton Innovations, it had disappeared and someone had reprogrammed it to be a target-and-forget weapon to eliminate the Baskervilles.

“Hounded” works on many levels. As well as by a robot, Stapleton and the Baskervilles are hounded by their sins, corporate and otherwise, as well the genetic struggle of infertility in the male bloodline. In the B-story, semi-regular character M.E. Eugene Hawes (Jordan Gerber) is hounded by the post-traumatic stress of losing someone he cared about in an explosion that also almost killed Hawes, as is Sherlock by the “loss” of The Woman. “Hounded” works as a retelling of the Baskerville tale by stripping the plot to its basics, losing the Gothic overtones, but keeping the “curse”—visiting the sins of the father onto the children—and setting it in a modern-day ethical wasteland. As always, Jonny Lee Miller and Lucy Liu are a joy to watch as Sherlock Holmes and Joan Watson.

As for the move to Sunday, Deadline notes that the action/comedy Rush Hour is more fitting of CBS’ Thursday night comedy line-up while


“Elementary attracts the kind of upscale CBS audiences that watch its Sunday lineup. Plus, Elementary is one of CBS’ most DVR-ed series, so a time slot is not that crucial to the show’s performance. Still, if history is any indication, any established CBS drama series sent to the Sunday 10 PM time period ends its run there, most recently CSI: Miami and The Mentalist. Elementary is owned by CBS, it is still relatively young and makes money for the company, so it is likely not destined for a quick death.”


I hope Elementary is around for a while longer.