“a pathway traced out across the desert” [STUD] 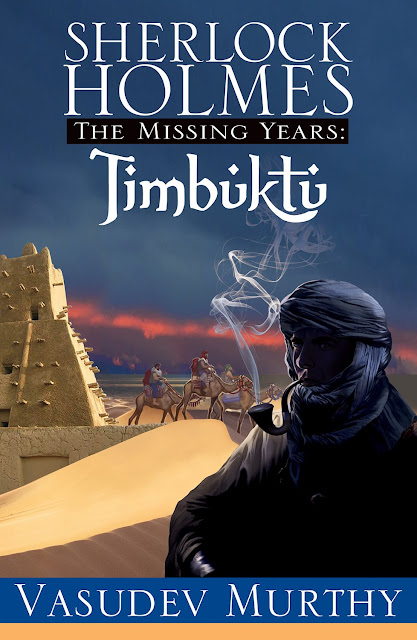 The three years Sherlock Holmes spent “dead” have been a favorite topic of speculation among Sherlockians for ages. His Great Hiatus has been the subject of a variety of pastiches over the years, imagining the Great Detective in locations such as Tibet, India, the United States, suffering amnesia, or even travelling through time.


Sherlock Holmes, the Missing Years: Timbuktu is the second Great Hiatus book written by Vasudev Murthy, the first being Sherlock Holmes, the Missing Years: Japan. Despite the similarity in title, this is neither a sequel, nor a prequel. As the foreword explains, this is intended as an alternative version of events, and stands completely on its own.

The plot of the novel revolves around the recovery of an ancient map, which may lead to a fountain of youth. Whether or not it actually does is not really the point, as the sociopolitical and theological ramifications for such a discovery could be immense. More importantly, the people who know of the map’s existence are willing to kill for it, and one of those people searching is Professor Moriarty.

The search takes Holmes and Dr. Watson through Morocco, across the Sahara, and down the Nile. The author often switches perspectives between Watson, Holmes, their associates, and the people pursuing them, permitting the reader to see all sides of the argument, as it were. There are also footnotes, though many add nothing by way of plot or flavor. The historical clarifications were welcome and helpful. The jokes tended to fall flat as mere distraction.

Mr. Murthy makes good use of the time period, vibrantly painting the setting with details of the state of Morocco at the end of the nineteenth century, and giving historical context for every region the characters travel through. By far the most interesting descriptions are of the Tuareg tribe Holmes and Watson travel with through the Sahara. Songs and stories are woven into the narrative, along with simple scenes of domestic life for a nomadic people that add color and atmosphere to the story.

The author does border on being too ‘meta’ with some of Watson’s commentary. He repeatedly references a public interested only in sensationalism and violence, excessively justifying the lack of such in this work. While timely the first few occasions, it quickly became overdone. Apart from that, Watson fulfills his stereotypical role here; he’s the narrator for most of the book, as per usual, and documents his experience faithfully and with literary flair.

While Watson remains as steadfastly British as he can without offending anyone, Holmes goes native. Holmes is delightful, throwing himself into a variety of roles through the story, from Polish priest to nomadic Tuareg, with energetic fervor. He doesn’t have many occasions to show off his deductive prowess, but when he does, he doesn’t disappoint.

Even though Holmes and Watson individually are fine, my greatest criticism of the book lies in their interactions with each other. I felt there was such a missed opportunity here, in that I never had a sense of exactly why Holmes summoned Watson in the first place. Holmes has a line about Watson’s ability to put him back on track with casual observations, a take on the ‘great conductor of light’ business from the Canon, but I still found myself wondering on multiple occasions why Watson was there. I don’t mean from a practical standpoint; Watson’s medical skills are put to good use, and indeed he does serve his function as unwitting muse to Holmes, but a sense of camaraderie and even friendship is either missing, or it feels like a one way street. They come across as coworkers, rather than one of literature’s most enduring friendships.

Even if something is lost in translation regarding Holmes and Watson, the adventure itself makes for a fun story. Since the premise of the book supposes that Reichenbach, and the events leading up to it, were entirely fabricated, it means that Holmes and Moriarty have never met. Moriarty is still a presence, but entirely behind the scenes up until the climax. Without giving anything away, I can say I thoroughly enjoyed the dialogue between Holmes and Moriarty, especially with Watson watching two great intelligences at opposite ends of the moral spectrum have a perfectly pleasant conversation. There is no waterfall at the end of this meeting, but the end holds just as much significance for all parties involved. It’s a well-crafted ending, with a charming denouement.

This is an entertaining novel loaded with historical details and social commentaries that takes a slightly different angle than many other Great Hiatus pastiches. It is not the sort of book that I wanted to devour in one sitting, but I did keep coming back to it. Sherlock Holmes, the Missing Years: Timbuktu is available from Poisoned Pen Press, and you can find it on Amazon.