The Unseen Watchers — Twitter and Sherlock Holmes on TV

"Was he also out in that deluge — the unseen watcher, the man of darkness?" [HOUN] 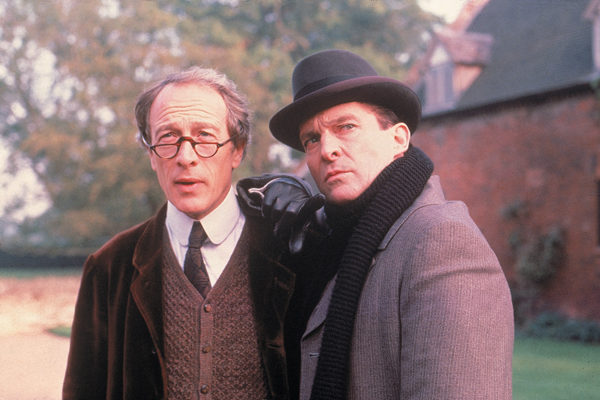 Everybody waits for the appointed hour — typically 8 or 9 p.m. Eastern time — and watches Twitter for the message: "Press play!" And another tweetalong (or the more commonly-used phrase "Twitter chat") is under way.

The golden age of Sherlockian tweetalongs was the two years from fall 2012 to fall 2014, when nearly every Thursday evening a Twitter account and a Web browser (or mobile app) would let you watch one of the Granada episodes starring Jeremy Brett and trade comments with fellow enthusiasts across the United States and in Canada, Argentina and the UK. There have been fewer tweetalongs since then, but it's still "a thing," as they say online.

They're not all based on Brett's performances — I've been involved in tweetalongs of Peter Cushing's Holmes, They Might Be Giants

, and even "The Sting of Death", and there have even been tweetalongs of BBC's Sherlock

. But the 51-minute length of a Granada episode is comfortable for the high intensity of watching in one screen window and dashing out scholarly or smart-alecky comments in another. (Besides, many people think Brett is the greatest and most authentic of all Sherlock Holmeses.) This fall several Granada tweetalongs are being organized by Art in the Blood.

What sort of thing do tweetalong enthusiasts say to one another? It ranges from perceptive comments about filmography ("I love this piece of business: camera on JB, retelling the ritual, his graceful fingers reassembling the crown just so") to affectionate remarks about Brett and Hardwicke/Burke. "Epic sideburns," somebody said when a minor character appeared in a full-face shot.

Sometimes — tweetalongs are predominantly a female sport, it seems — there are wistful or angry comments about how women were treated by society in the 1890s and, by extension, even today. During a tweetalong of "The Musgrave Ritual," someone tweeted:  "This shows how self-absorbed both Holmes/Brunton are: I can use her, but she won't catch on." Or just: "What a sleazeball."

And sometimes the comments show a characteristic that has been attributed to Twitter as a whole: they're so cryptic, or such inside jokes, that few know what they mean. "Holmes: IRL LOL #MUSG," somebody tweeted at one point. LOL is "laughing out loud", IRL is "in real life", and #MUSG, with the # at its beginning, is a "hashtag" identifying what Twitter conversation the comment belongs to. But with all that glossing, I'm still not quite sure what the speaker was saying.

Sherlockian tweetalongs (and if there are non-Sherlockian movie tweetalongs, I'm not aware of them) started in September 2012. That was when the PBS station in Washington, DC, launched an all-British channel, WETAUK, and started broadcasting a Granada episode every Thursday. Local enthusiasts June Matics and Susan Bailey, doing business as @sherlock_DC, started livetweeting what they were watching, and soon folks far from the District of Columbia joined in. 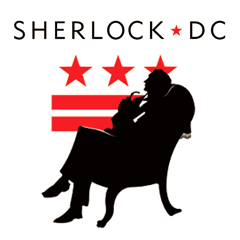 It was never a big crowd, maybe a dozen on a good night, but the enthusiasm was contagious, and friendships developed, some of which continue strong. There were also running jokes — every week one participant pointed out Brett's lusciously rolled R's, another identified the many, many scenes in which Granada cinematographers made use of mirrors, and of course a few people noted every affectionate word between Holmes and Watson with the hashtag #consultinghusbands. (Maybe that last one wasn't meant as a joke.)

"After a year of this," Bailey says now, "the TV station switched up its program schedule, and I kept up the tweeting with my own schedule for almost another year. I like to think that we were both reverential and irreverent. I also enjoyed my research beforehand. I used to look up relevant factoids to tweet and Paget illustrations of scenes."

But then, she says, "participation started to wane, and I wasn't free on Thursday evenings any more." The final blow came when YouTube, which had been many viewers' easiest source of the Granada episodes, was scrubbed clean of Jeremy Brett for copyright reasons. The last DC-based tweetalong came October 30, 2014, and a Sherlockian era was over.

Since that time,  @Art_intheBlood has been staging #GranadaHolmes and #Elementary tweetalongs. We'll see how it continues to grow!