"I broke my blue ribbon and began to drink again" [CARD] 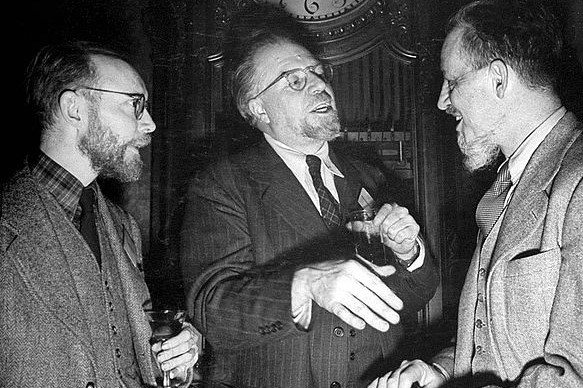 When I was a teenage Sherlockian I got into a good deal of trouble by writing a priggish article about alcoholic drinks and publishing it in Baker Street Pages, the newsletter of the time for younger Sherlockians. Without going back to read it now (a proceeding that would bring me acute embarrassment, I'm afraid), I can safely say it made the customary argument that fun can be had without booze. I had not much experience of fun in those days, I'm afraid, and no experience at all of drinking liquor. The article brought me a prompt, eloquent and humiliating response from one of the established Sherlockians of the time, Dean Dickensheet, who told me very clearly that I didn't know what I was talking about, that Sherlockians were not drunks, and that I was entitled to adhere to "Methodism and total abstinence" if I wanted to, but shouldn't expect everybody to follow suit.

He was right, of course, although there is some evidence that the Sherlockians of earlier generations were able to sock the stuff away rather impressively. Sherlockian history records that at the Baker Street Irregulars dinner of January 1946, the bar bill for 60 gentlemen added up to "96 cocktails, 243 scotches, 98 ryes and 2 beers".

After all, the BSI of the 1930s had codified drinking in their Constitution and Buy-Laws, listing several customary toasts to be drunk at every gathering, "after which the members shall drink at will." There were also rules, honoured chiefly in the breach, about who should buy the next round; and the Commissionaire, in those days of speakeasies, was assigned "to telephone down for ice, White Rock, and whatever else may be required and available." This is no surprise; Christopher Morley, who founded the BSI, also established the Three Hours for Lunch Club — but not only because he was a slow eater.

Decades later, probably around the time I was writing my juvenile tirade in Baker Street Pages, that great Sherlockian John Bennett Shaw started telling people that "All you need for a scion are two people and a bottle. In a pinch, you can dispense with one of the people." It's become conventional wisdom, and most Sherlockian societies honour its spirit, or spirits, by having drinks available, if not quite compulsory. I heard recently about one society which has suffered a drop in attendance since having to move its meetings from a restaurant to a (dry) library.

These thoughts come to mind because, in preparation for the BSI Weekend in New York in January, a number of people have been chatting online about gatherings at which, so it seems, liquor will be available. (I don't know that many people mix their beverage of choice with White Rock these days, but some do still require ice.) A certain pub on W. 45th Street, a short walk from what was once Christopher Morley's office on W. 47th Street, has been mentioned as a place where one might possibly find Sherlockians at late hours during the weekend festivities.

Let's hope they have a great time. Let's also acknowledge that there are Sherlockians who drink very little, and some who drink not at all. I know more than one Sherlockian who can't tolerate alcohol for medical reasons. There are probably some who stay away from drinking on religious or moral grounds, some who can't afford to drink, some who don't like the stuff, possibly even some who admit to being alcoholics and are supported by AA in their determination not to relapse. For the sake of those people, and even of light drinkers like me, I sometimes look askance at Sherlockian events that offer an open bar and an accordingly elevated ticket price.

That's right, I'm not a total abstainer any more. But my primary beverage is one apparently not consumed at that 1946 dinner — red wine — and I generally consume so little of it that I doubt whether, if I were to show up one evening on W. 45th Street, the diehards would think me eligible to play Drunk Canon. However, I promise not to be reproachful of those who do get merry and drink more than the traditional toasts, as long as they in turn will tolerate those who don't. Fun can, you know, be had without booze.

[Editor's note: we can't help but think of Frank Sinatra in this situation, who said, "I feel sorry for people that don't drink, because when they wake up in the morning, that is the best they are going to feel all day."]