Sherlock Holmes and the Mystery of Einstein's Daughter

"I guess you are the daughter" [STUD] 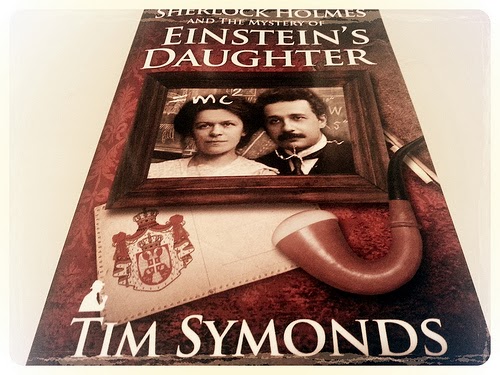 Do you ever read a book that makes you want to read more? I don't mean like the way you can only eat just one potato chip, or the way a book leaves you with a cliffhanger so you can't wait for the next in the series to come out. When I finished reading Sherlock Holmes and the Mystery ofEinstein's Daughter, by Tim Symond, I found that it had sparked a desire to read more about Einstein and to go back and reread the cannon.

I mentioned before that I have this (questionably) bad habit of buying more books than I can read. One such book was the biography of Albert Einstein by Walter Isaacson. It has sat on my book self staring at me in accusation for well over five years. (I don't guilt easily.) I had an increased urge to finally read Einstein after reading this latest pastiche because, as the title suggests, Einstein's real life (and a rather mysterious part of it) is a key plot point in the story.

Einstein and his first wife, who was a brilliant mathematician in her own right, had a child out of wedlock. Nothing is known about that child and what ever became of her. It's a mystery that (apparently) still baffles many modern day historians. But would it baffle the great Sherlock Holmes?

Additionally I wanted to go back and reread the Canon because I realized I've read so many pastiches that the Canonical facts were starting to get blurry from the pastiche versions. Doyle often made references to previous stories by having Watson mention old cases in his writing. This is a very popular practice among pastiche writers. It's a way for writers to contextually place their stories in the Sherlock world, but it's also a way (and I think it's the real reason most writers do it) to wink knowingly at the Sherlockian scholars among the readers. Symonds also does this but he also puts a reference guide in the back for the stories that he references (seven, in case you were wondering), and I found this very helpful.

Tim Symond has written several Sherlock Holmes pastiches, but I wasn't aware of them until he reached out to us late last year. The fist thing that struck me about his work was how well researched it is. The details of both the regions they travel, and the political climate are very vivid.

In this story, a much older Holmes and Watson decide to travel back to Reichenbach Falls (why and how Watson gets Holmes to go is pretty entertaining). In order to travel safely, they are forced to contrive an elaborate scheme to avoid the pursuits and vengeance of Professor Moriarty's henchman, Colonel Sebastian Moran. Upon their arrival, they are asked to investigate the past of Albert Einstein, by the Dean of a Swiss university, as a kind of background check before they admit the promising physicist into their school. The investigation takes them all across Eastern Europe and into some very interesting settings and situations.

This pastiche is told from a stronger Watson viewpoint than most Sherlock Holmes stories are. I liked the strong portrayal of Watson but personally felt like Holmes was almost a supporting cast member instead of a lead or co-lead. Also, without giving anything away, there are several character conflicts you expect to encounter in the book, based on the setup, that don't happen. They seem to be setup to happen in later books (?) or maybe this is a theme carried over from Symond's previous books, I'm not sure, but I found this just a little frustrating. (BTW I don't think being frustrated by a book's ending is necessarily a bad thing, the author should finish the story the way he intended to tell it, not the way the reader expects it to happen.)
isn’t long, it was a quick read, and the details are very engrossing. Plus, in my opinion, any book that makes me want to read and learn more is a good book.