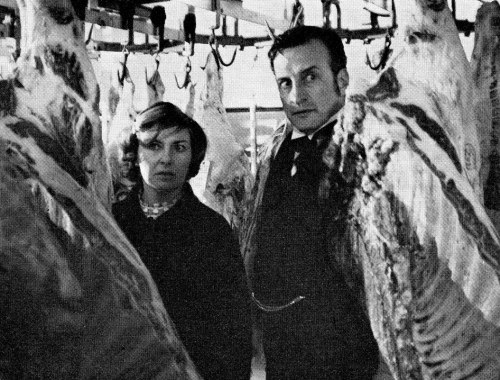 If you're a fan of quirky music, as I am, you've no doubt encountered the duo known as They Might Be Giants.  What you might not know is that the band borrowed their name from the title of a 1971 film starring George C. Scott (based on a play by the same name).  They Might Be Giants tells the story of a millionaire named Justin Playfair who, after the death of his wife, begins to think he is the great detective, Sherlock Holmes. He wears the famous deerstalker cap, smokes the calabash pipe, and makes Holmesian deductions about strangers he meets. He is befriended by a psychiatrist named Dr. Mildred Watson, who at first attempts to analyze him.  The two develop a friendship that is not unlike the friendship between the canonical Holmes and Watson.

You can read a fair review of the film in Alan Barnes' book Sherlock Holmes on Screen, and the film is available for streaming at Netflix. The YouTube clip below (from early in the film) shows George C. Scott's rather straightforward and competent Holmes imitation. (Sherlockians will enjoy the presumably intentional canonical reference of Dr. Watson's patient being named "Mr. Small," a character from The Sign of the Four.)  Although the plot of the film is a bit hard to follow at times, Scott's performance is always enjoyable, and the relationship that develops between Justin Playfair and Mildred Watson is alternately touching and humorous. Meanwhile, the presence of a female "Watson" in this film is more evidence that Elementary's Joan Watson, who has been so controversial for so many Sherlockians, is not as groundbreaking as everyone seemed to think!


Although it's not really a "Sherlock Holmes film," in the strictest sense, They Might Be Giants is well worth watching for the Sherlockian material that makes the film's premise so intriguing.  Think of it as a "Sherlock Holmes as Don Quixote" tale in a contemporary setting.  Indeed, the title of the film appears to be an indirect reference to Don Quixote's predilection for "tilting at windmills," under the impression that they are terrible giants.  The following dialogue from the film makes this connection explicit, and sums up the basic thrust of the film:


Watson: God! You're just like Don Quixote, you think everything's always something else.
Playfair/Holmes [Laughs]: Well he had a point. Of course, he carried it a bit too far. He thought that every windmill was a giant. That's insane. But, thinking that they might be... well… all the best minds used to think the world was flat. — But, what if it isn't? — It might be round — and bread mold might be medicine. If we never looked at things and thought of what they might be, why, we'd all still be out there in the tall grass with the apes.

Have you seen the film? What did you think of it?