"he had spent a part of his life in America" [VALL] 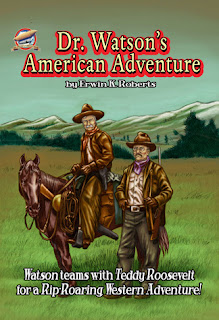 Trying to "fill in" gaps in the canon can be rather tricky - done well, it can provide insight into the character of Holmes and Watson (The Seven-Per-Cent Solution, for example). Done poorly, it can be awkward and feel inauthentic.

Thankfully, Dr. Watson's American Adventure from Airship 27 is a strong example of the former, showing us Watson in a post-Reichenbach adventure, finding his way to America to team up with Theodore Roosevelt. Combining elements of Victorian literature, Westerns, and historical pastiche, Erwin K. Roberts tells a tale that could easily fit between "The Adventure of the Final Problem [FINA]" and "The Adventure of the Empty House [EMPT]". The story moves along at a very brisk pace, and quite honestly, it's a flat-out treat to read. Structured as a reminiscence between Watson and Holmes, it also serves to highlight these characters without necessarily being driven by their interactions. Thankfully, this book serves as a way to highlight Dr. Watson's solo adventures....and hopefully, there will be another coming soon.

(Thankfully, this volume also provides value for the money in that it contains another Victorian-style pastiche featuring a character named "Hound Dog Harker" which is quite entertaining in its own right.)

Much like Airship 27's earlier Holmes book The Baron's Revenge, Dr. Watson's American Adventure is available via Amazon.com. It's an entertaining work that is well worth reading.