The Making of Sherlock Holmes vs. The Wolfman 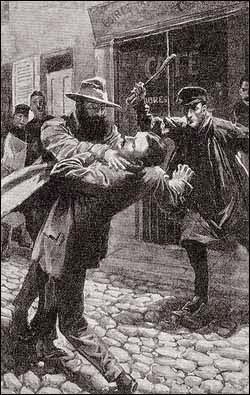 and co-proprietor of The Wessex Press. He manages the publishing for The Baker Street Journal and works in video production in his day job.
My Sherlockian Reel-Life - or, I Was a Teenage Movie Mogul. On Blaine Avenue, in South Bend, Indiana, from the years 1972-1977, I had cornered the no-budget Super 8 filmmaking industry. I was the preeminent auteur on my block.

With my small company of actors (my brother Patrick and my pal Larry Bilinski), we cranked out a series of "epics" which perfectly reflected not only our adolescent interests, but our lack of movie making expertise as well. These included, but were not limited to, our critically acclaimed remake of King Kong, the bizarre Professional Wrestling/Game Show amalgam, "Sadist Theater"; our homage to Night of the Living Dead, entitled "Dead of the Living Night"; and our science fiction epics "Star Monster," and "Rocketship Zero-G."

My entire movie making career was, however, a mere tune-up for what stands today as the pinnacle of my entire filmography, "Sherlock Holmes vs. The Wolfman." Our most ambitious film, "Wolfman" (as it has come to be known to us insiders) was the third and final installment in what we called our "black and white trilogy" (the first two being the above mentioned Dead of the Living Night; and Star Monster ). Wolfman actually had a budget.


We special-ordered black and white film stock, made or rented costumes, scouted locations, and bought a decent Wolfman mask. All in all, I believe we spent about $45 (mid-1970's dollars, however!) And we even had a script, an element that up until this film had seemed a constraint on our otherwise free-flowing artistry.

My friend and fellow filmmaker Larry was Sherlock Holmes. I, in addition to my many behind-the-scenes roles, stood in as Dr. Watson. My saint of a mother made a cameo as Mrs. Hudson (wearing a shawl and a grey "old-woman" wig, which came with an authentic bun!), thus providing me with infinite proof of her love for us. She was a real sport. And the Wolfman...ah, he was played rather enthusiastically by my brother Patrick.

Briefly, the plot is as follows:


A Wolfman is on the loose in London. After a grisly murder in an alley, Holmes begins to monitor the situation. Following a second similar murder of an old man (another rubber mask!) in a cemetary, Holmes and Watson decide to take up the case. After finding a scrap of cloth from the Wolfman at the scene of the crime, they use Toby the bloodhound to track the Wolfman to his lair, where he attacks Holmes and Watson and escapes. As scripted, the Wolfman escapes, only to be dispatched later by Watson, when Holmes uses himself in disguise as a decoy to lure the Wolfman into a trap.


Unfortunately, following the shooting of this thrilling climax, everything following the discovering of the Wolfman's lair was lost by the film processor, and so the movie's ending was reworked. Now, following the climactic encounter in the den of the Wolfman, the film ends with the following words on the screen: "Sherlock Holmes never did catch the Wolfman. He still stalks the streets of London to this very day." Ah well, it always gets a laugh.


Many of you reading this were present for its public debut a few years ago at a film meeting of the Illustrious Clients of Indianapolis, as I had transferred it to videotape. It pleased me very much to hear, as an adult, the kind words of appreciation. I particularly relished the comments of Pat Ward, our own Sherlockian film expert, who said, "That wasn't nearly as bad as I thought it would be!"

Some of the behind-the-screen tales of the film's shooting (getting kicked out of a cemetery for improper "horseplay," tweed coats and inverness capes in 90-degree heat, etc), will have to wait for another time. I did go on, in my adult life, to have a professional career in film and video production, and have produced countless shows and commercials using equipment and resources unimaginable to the 14 year-old behind the Super 8 movie camera.

But to be honest, no production I have been involved with is as dear to me as "Sherlock Holmes vs. The Wolfman."