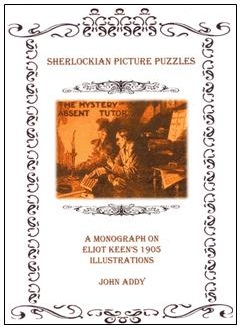 In the early 20th century, Sherlock Holmes was as seamless a part of the media as he is today. Case in point: regularly produced picture puzzles in which Sherlock Holmes invited the reader to make sense of a number of clues (or, “clews”) found in the picture. He appeared in a variety of situations, and all of the puzzles rely on the double meaning of words. The Musgraves Sherlock Holmes Society in the UK has now compiled twelve of these puzzles, along with answers and explanatory notes, into a 26-page monograph by John Addy.

The puzzles themselves are from Eliot Keen's original 1905 illustrations that originally appeared in American newspapers (can you see the William Gillette portrayal coming through?), with solutions following in subsequent publications.

I tried one of the puzzles, with little initial success. As the flyer above states, the trick is that one has to think as though one is still at the turn of the twentieth century. This proved to be more challenging than I thought it would be, but if it weren't a challenge then it wouldn't be as fun. I freely confess to resorting to the internet to verify (or, ahem, discover) the solutions I came up with. Some practice in the art of ‘punning’ is also helpful (in the below example, he’s pointing to a sawhorse - ha).

The idea to make some of these puzzles available again is brilliant; it is both a fun mental exercise and a neat way to look at life and customs of the time. If you're interested in purchasing a copy of the monograph, you can find the ordering information on the link above.

This might make for an interesting challenge at your next Sherlock Holmes society meeting, or simply a bit of good fun and a mental challenge on your own. Go ahead - what do you make of it?

See the sample puzzle below to try your hand at it.

Kate writes at The Diary of Dr. Watts.