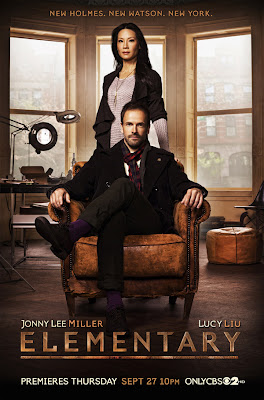 On May 16, amid the flurry of Sherlock buzz hitting the web, CBS announced its fall schedule and Elementary made the cut, set to air on Thursdays at 10:00 pm, the time slot currently occupied by the Sherlock Holmes-inspired “The Mentalist” (which will move to Sundays).

The initial chatter was limited, due largely to the fact that there wasn't much information available about the series other than its stars, Jonny Lee Miller and Lucy Liu. When compared with the impressively successful "Sherlock," it was natural for some commentators to wonder if the American production was simply borrowing heavily on the British hit.

We'll know for certain on September 27, when the series will premiere on CBS. Now we're seeing a fuller synopsis of Elementary than we’ve yet had, including this tidbit; “Following his fall from grace in London and a stint in rehab, eccentric Sherlock escapes to Manhattan where his wealthy father forces him to live with his worst nightmare – a sober companion, Dr. Watson.”

There was also three minute trailer of  Elementary that Sherlockians  no doubt combed through for clues on the quality of the show as if it were the Zapruder film. In the last couple of weeks, CBS has posted a longer  trailer (video embedded below the jump).

For months Moffat held the threat of lawsuit over CBS’s head if their Holmes incarnation was not noticeably different from the BBC; now he wonders if the very differences he called for make it anything but Sherlock Holmes. Politics lost a fine spin doctor when Moffat entered show business. Of course spin is a major part of a producer’s job and Moffat is very good at what he does, as even a cursory review of his résumé will confirm.

The changes wrought by Elementary are no more violent than others that have been inflicted on the Canon in the past and, indeed, have precedence. Holmes has already been brought to the present, given a female Watson and moved out of London—They Might Be Giants (1971), The Return of the World’s Greatest Detective (1976), The Return of Sherlock Holmes (1987), and Sherlock Holmes Returns (1993) more or less fit the bill. (Interestingly, the last two were broadcast on CBS.)

It is not, then, the changes made to the Canon, but the skill to which with they are handled. Moffat and co-creator Mark Gatiss have proven themselves to viewers world-wide that they are up to the task. It is now in the hands of the Elementary team to do the same. "I don't want it to sound like Mark and I don't want other people to try this,” Moffat concluded in his take on Elementary. “We welcome it, but don't damage the brand."

I am of two minds on that last statement. He does have a point. One need only look at the cautionary tale of Paramount and Star Trek.

After its 1967 network cancellation, the 79 episodes of  Star Trek went in to syndication, and a new, large base of fans sprang up. Novelizations (“pastiches” Sherlockians would call them), magazines and toys brought in much need revenue to the studio. In fact, by the mid-1970’s, Paramount decided to bring back most of the cast in a new live-action TV series. In 1977 Star Wars raked in hundreds of millions at the box office, and Paramount decided to go for the brass ring and instead launched a hugely successful film franchise.

However, the film cast was aging and Paramount announced in the '80's a new television show, with a new cast, to take place 87 years after the original series. The hue and cry from fans was loud and mostly negative. “Star Trek is not Star Trek without Kirk, Spock and McCoy” and “I’ll never watch it” were common refrains. It should sound familiar to any Sherlockian who remembers the period before Sherlock aired, or indeed, the one we’re in now with Elementary. Star Trek: The Next Generation was the highest rated show in syndication in its day, beating out network programming in some markets. It was and still is beloved.

But what good is a cash cow if it can’t be milked for every drop? The optimal time for a TV series in syndication to generate maximum profits is seven seasons and to compensate for ST:TNG's eventual demise, Paramount spun off Star Trek: Deep Space Nine. It too was a success, if not as huge as ST:TNG, lasted for seven seasons and had its own spinoff  Star Trek: Voyager.

Unfortunately, Paramount was not done. Next came Enterprise (later called Star Trek: Enterprise), about the generation previous to Kirk’s, just before the founding of the Federation. Instead of keeping with Gene Roddenberry’s original premise of Star Trek as “Wagon Train to the stars”, the producers decided to make Captain Archer and crew warriors in a Temporal Cold War against aliens from the future, who want to keep the Federation from ever existing. The problem with being a hero in a time war is that if you're victorious, no one will know it, because things will stay the way they’re suppose to be and your victories will never have existed. Enterprise barely limped to four seasons. The producers were so desperate for ratings at the end, that for the series finale they brought in Jonathan Frakes and Marina Sirtis from ST:TNG to watch the events unfold on the Enterprise-D holodeck.

Paramount drained Star Trek until it was an empty husk. So anxious to keep their corpse making money, the studio turned it over to the shaky-camera, lens-flaring hands of J.J. Abrams, who proceeded to reboot the franchise by destroying the last 45 years of Trek. Trekkers can take cold comfort in the knowledge Abrams’ travesty is “an alternate time-line”. Spoiler alert: Cumberbatch will play Khanin "Star Trek 2".

Is this, then, the dire future that Elementary will bring us?

The answer, I think, is no. We have not yet reached the saturation point; the Holmesian sponge is mighty large as the continuing flood of pastiches, in many media, can attest. At the May 2 PBS Masterpiece/Sherlock  question and answer event, Benedict Cumberbatch responded to negative comments about Elementary this way:  “Jonny’s a friend, you know, and as we know with the Robert Downey, Jr. franchise there’s room enough for two, so why not three?”

Elementary Executive Producer Rob Doherty’s focus for the series will be one taken from the Canon but rarely depicted on screen: Watson’s weaning Holmes of his cocaine addiction. At the Television Critics Association summer press tour on July 29, Doherty said,


“The original Sherlock dabbled with cocaine and opiates. Our Sherlock had those same problems... but the big difference is our Sherlock hit a serious wall. To his great surprise, the world is not as easy as he thought. Something terrible happened to him in London and he spiraled out of control."


At San Diego’s ComicCon on July12,  Doherty gave reassurance that Jonny Lee Miller and Lucy Liu’s relationship will not turn romantic, as Sherlockians with a familiarity of the foibles of American television had every reason to fear. The change of Watson's gender was “never designed” to create romantic tension. “What would be more trying for Sherlock Holmes than working with a Watson that's a woman?" At  T.C.A. event Doherty went even further:


“For me, it’s completely off the table. It’s just not in my head for Season 1 and, looking ahead … I just don’t feel like that’s a part of the show.” He wants to “honor the original relationship” of the pair, adding, “And the original Holmes, to the best of my knowledge, never slept with Watson.”


And don’t expect to see a re-imagining, of say, “The Speckled Band” or “The Red-Headed League” a la Sherlock: “We love the original stories. At the same time, what we love is the relationship [and] the mythology. Primarily, we’re looking to craft new stories.” The Canonical in-jokes that Moffat and Gatiss delight the faithful with will, in all probability, also not be a part of the equation. But we can expect a slow reveal of the shadowy figure of  Moriarty over the course of the first season.

The pilot was screened at ComicCon and met with an “enthusiastic response” according to James Hibberd at EW.com. Whether that will be the case with the American public and Sherlockians remains to be seen.

The reality of British television means Sherlock is appointment television. They can take a year and a half, craft the three shows per season to a diamond-like brilliance and hardness, have five weeks to rehearse and film each, and reap in the accolades and BAFTAs. The broadcast of Season 2 after an eighteen month hiatus guaranteed high ratings, both in England and America. That is its strength as well as its Achilles heel.  In the meantime, anyone can come along with a knock-off Holmes, like those fake Rolex watches on the Manhattan street corners that Jonny Lee Miller will be sleuthing on. This is the damage to the “brand” Moffat speaks of. The worry is, perhaps there'll be not a cheap knock-off but a quality product, something shiny that will grab the spotlight, if only for a little while. Even if Elementary is a critical and popular success, Moffat has nothing to worry about.

Of course, the problem for Elementary is to come up with twenty-two or so quality episodes over the course of a season. That is, if it lasts that long. Network heads can be fickle, and even decent ratings are no assurance of continued existence. Based on recent history, only about 35% of freshmen TV shows make it to their sophmore year. The fuss and bother over Elementary that has occurred since January might be moot by the time Henry Baker sits down to his Christmas goose.

I for one will wish it well and the complements of the fall television season.


Author's note: This post evolved from a discussion between, Larry Feldman, Nick Katt, Joe Riggs and me on the Sherlock Holmes Social Network, an online meeting site for Sherlockians of all stripes. The opinions expressed are solely mine.

Editor's note: This essay was submitted by James O'Leary, a long-time Sherlockian and a huge fan of I Hear of Sherlock Everywhere.
--