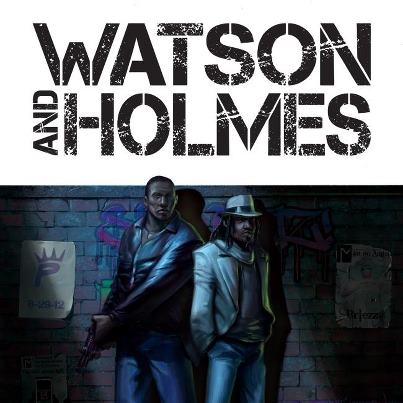 A new modern urban re-interpretation of Sherlock Holmes. That's how the digital comic Watson and Holmes is being referred to.

The recent revival in Sherlock Holmes material across a variety of media has truly increased the buzz around our favorite topic. From the reimagining on the big screen, courtesy of the Robert Downey, Jr. / Jude Law films, to the small screen updating of the characters in Sherlock, through Benedict Cumberbatch and Martin Freeman and soon the Jonny Lee Miller / Lucy Liu version in Elementary, there is plenty of interest in the perennial character.

Now, we're prepared to be treated to yet another version of the iconic detective and his faithful friend and colleague, thanks to New Paradigm Studios. In this episode, we're joined by three of the principals who are behind the updating of Sherlock Holmes and Dr. Watson the a modern urban setting of New York and as African American characters. Brandon Perlow, Publisher and co-creator of Watson and Holmes, Justin Gabrie, Senior Editor, and Karl Bollers, Writer joined us to tell the story behind their work with Paul J Mendoza, Co-creator and color artist and Rick Leonardi, Penciler - who has worked on a number of Marvel and DC Comics projects.

We also discuss the issue of race and the Canon, landing on an interesting work from Vol. 27, No. 3  (September 1977) of the Baker Street Journal - not a Gas-Lamp, but an article by William P. Collins titled "Norbury and Steve Dixie: Holmes and Victorian Racial Attitudes."