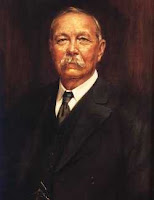 For many Sherlockians, there is a great curiosity to actually see - and hear - Sir Arthur Conan Doyle discuss the background around the creation of the Great Detective's exploits. It is one thing to read his thoughts; it is another to observe him as he discusses his works.

May 22, 2012 marks the 153rd birthday of Sir Arthur Ignatius Conan Doyle, who brought the world such wonders as Professor Challenger, Sir Nigel, Alleyne, Brigadier Girard and of course, Sherlock Holmes. His work spanned decades and included a variety of written work from the medical and scientific to the fantastic and spiritualistic.

But it is not often that one gets to hear the Scottish brogue and strident voice that are behind the considerable visage we know so well. Now available via the Internet Archive, here is a 1927 newsreel in which Arthur Conan Doyle discusses the origins of Sherlock Holmes. The first five minutes of this video focus on Holmes; the remainder cover his exploration of spiritualism. (Both overlap in a surprising way, but please feel free to watch in order to avoid spoiling).


On the occasion of his birth, what would you say to Sir Arthur Conan Doyle? As a spiritualist, you know he's listening.