"Holmes For the Second Time" [ABBE] 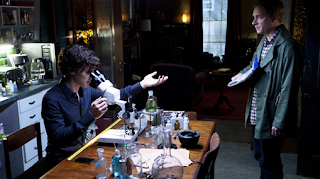 #SherlockPBS - a "hashtag" as it's known in Twitter - is a phrase you should get used to. Because beginning on May 6, it's going to reach a fever pitch when the acclaimed series Sherlock (starring Benedict Cumberbatch, Martin Freeman and Mark Gatiss, written by Steven Moffat and Mark Gatiss) returns to Masterpiece on PBS for its stunning second season.

This second series is expected to be even bigger than the first, as the stars have come into their own a bit and they and the series has been critically acclaimed. The second series also has the confidence of the creators, as the first was something of an experiment. Having ensured that the experimentation was indeed successful, they mined the Canon for the three most intriguing and popular stories for inspiration in season two. As Steven Moffat puts it in shorthand, this season consists of "the hound, the woman and the professor." More formally, those episodes consist of "The Hounds of Baskerville," "A Scandal in Belgravia" and "The Reichenbach Fall."


Watch Sherlock Season 2: Three New Shows on PBS. See more from Masterpiece.
And once again, we've been asked by the fine people at PBS and Masterpiece to host a Twitter chat. You may recall that we originally participated in the inaugural chat of the first season ("More to Me Than The Twitter" [ILLU]) and that it was quite a lot of fun - think of it as a giant digital living room in which commentary is flying fast and furious as the show airs. You can follow us at @BakerStreetBlog and we've set up a dashboard that you can follow on Tweetgrid.

And we won't be alone as we twitter our way through the show - also assisting with the chat will be author and adventuress Lyndsay Faye, BSI, ASH (@LyndsayFaye), the ever-enthusiastic podcasting and blogging team of The Baker Street Babes (@BakerStBabes), with the illustrious Leslie S. Klinger, BSI, 2s (@lklinger) following things up three hours later on the west coast.

We'll all be looking for your questions, insights and observations as we move through the episodes. Or if you don't have a Twitter account or would prefer to take it all in, you can just sit back and watch the tweets roll by. We look forward to joining you these next few Sundays.