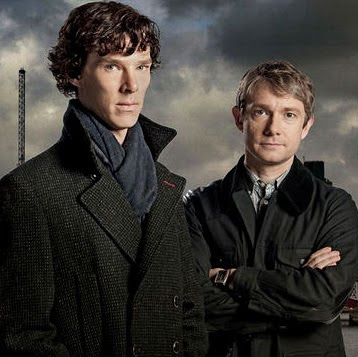 Sherlock mania as at its heights. The second series of the BBC's Sherlock is making its way to the U.S. shores currently, and fandom online and offline is continuing to grow.

On behalf of the show, Burt made his way to New York City on May 2, 2012 for the sneak preview of the new season and question and answer time with some of the cast and crew of Sherlock, including Rebecca Eaton, Steven Moffat, Sue Vertue and of course, Benedict Cumberbatch. About 800 people crowded into a theatre after 10,000 applied for seats, and the reaction - including screams - were reminiscent of the Beatles coming to the Ed Sullivan Show in the 1960s. And this is nothing new; Frank Sinatra garnered a similar reaction at the Paramount in New York City back in the 1940s. Thanks to Burt's courageous reporting, we have some clips from the event and the queue, as well as a question and answer session with the cast, in which we're able to hear and feel the excitement of the crowd.

We've witnessed the #believeinsherlock movement that arose from the BBC airing of the series and how the phenomenon has grown. We discuss a bit of that and we sing our own praises to Sherlock Holmes, in a manner of speaking.

And with such an enthusiastic new group of fans, it's inevitable that we would welcome them to the world of Sherlockians. The Editor's Gas-Lamp from the current issue of the Baker Street Journal. (Vol 62, No. 1), titled "Consider yourself at home," is the perfect way to do so.

Download this episode by right-clicking the icon and selecting "Save As..." or simply click on the file to listen, or on the nice box above. (File size: 23.8 MB, 52:10)

Be sure to check out our sponsors: Wessex Press and The Baker Street Journal