"Back Upon the Moor Once Again" [HOUN] 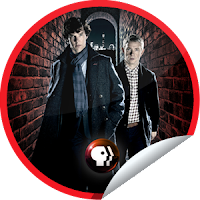 #SherlockPBS is back for a second week. As you no doubt recall, Season 2 of Sherlock premiered on PBS's Masterpiece on Sunday, and evidently the ratings were quite strong, with over 3,200,000 viewers. That's a figure that more than doubles the average primetime viewership for PBS.

Even Masterpiece Exeuctive Producer Rebecca Eaton was excited to share the news when she said, "Benedict Cumberbatch and Martin Freeman have taken Sherlock and Watson to a whole new level. We're thrilled that viewers have responded so enthusiastically to this groundbreaking series."

As you may recall, we participated in the live Twitter chat during the show in which we shared observations, commentary and discussion related to the characters, inspiration and other elements of "A Scandal in Belgravia." [If you missed the episode, you can still watch it on PBS online until June 15.] There were over 5,000 mentions of the #SherlockPBS hashtag on Twitter and over 15,000 people checked in via GetGlue, which is an a social TV site that connects viewers via the web (where you can earn stickers such as the image above).

On Sunday May 13, you'll be treated to Episode 2 of Season 2, titled "The Hounds of Baskerville." For those of you screaming "That should be 'The Hound of the Baskervilles'!" that's not a typo. In this case, Baskerville is a top-secret military compound where it is rumored that there are biological weapons and experimentation on genetically engineered animals, which may or may not account for "the footprints of a gigantic hound!"

You can see a preview here:


Watch Sherlock Season 2: A Scene from The Hounds of Baskerville on PBS. See more from Masterpiece.


And if you're in the mood on Sunday evening, you may once again join us for the Twitter chat (check out the Tweetgrid we've set up to follow it), along with co-hosts Lyndsay Faye (@LyndsayFaye), The Baker Street Babes (@BakerStBabes) and for the west coast, Leslie Klinger (@lklinger).

We hope to see you there!