"Possible Actors in This Drama" [SECO] 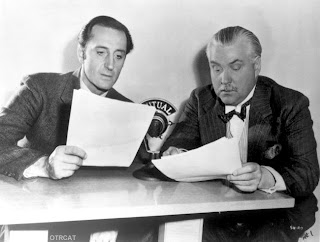 Sherlock Holmes has a long history in the medium of radio, stretching back as far as 1930 and possibly (if certain reports are to believed) even earlier.

Among the notable actors who have played Holmes and Watson on the radio are such luminaries as William Gillette, Basil Rathbone, Nigel Bruce, Clive Merrison, Michael Williams, Andrew Sachs, John Gielgud, Ralph Richardson, John Neville, Cartlon Hobbs and Norman Shelley, among many, many, many others. For every screen appearance by Holmes and Watson there are at least three times that number in the medium of sound.

Do you have what it takes to join their ranks?

This July the Post Meridian Radio Players will be presenting an original live radio adaptation of The Hound
of the Baskervilles as part of their Summer Mystery Radio Theater. The Hound will close out an evening of other classic radio mysteries, including a recreation of the Burns and Allen classic "Gracie Take Up Crime Solving" and the Suspense classic "Sorry, Wrong Number."

For those Baker Street Blog readers of a theatrical bent who are in the Boston area, auditions will be held in
Somerville, MA on the evenings of May 21st and 22nd. Further information on the production can be found on the Hub of the Universe website. Check out their site for information on auditions, including sides and sign-up.


When you make purchases from the links we share, it provides us with a stream of revenue to help keep this site running. Thank you for your generosity.
--
5/16/2012 02:21:00 PM
audio, blog, events, News, reader participation, theater