"We Are, As Usual, The Irregulars" [LADY]

"we are, as usual, the irregulars" [LADY]


On January 2nd, 2012, The Times of London featured a very special comic insert....one which is of particular interest to Sherlockians and graphic literature fans alike, and helped set a proper tone for 2012

As you can see by the embedded graphic below (click to enlarge), the Times featured a junior insert featuring The Baker Street Irregulars - characters who are the centerpiece of a graphic novel series by Tony Lee (who also finished a terrific run on IDW's Doctor Who series) and Dan Boultwood for Franklin Watts/EDGE Books. There are currently four stories available in graphic novel form, and this series has been featured in this very blog (see "The Baker Street Irregulars — A New Graphical Series") 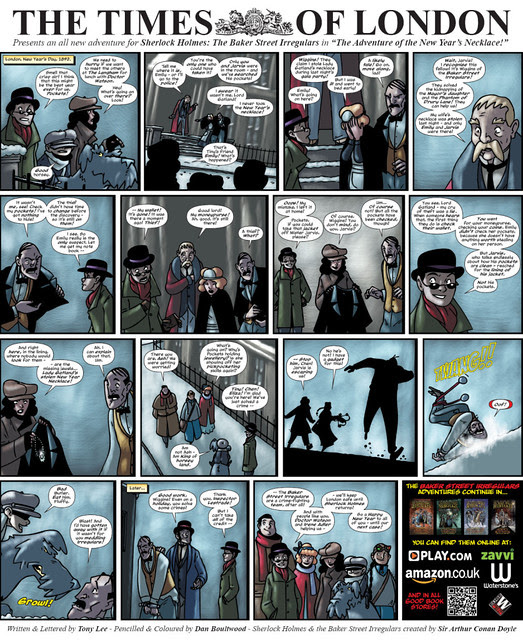 The Times story - named "The Adventure of the New Year's Necklace" is a great, New Years Day-themed tale, taking place in 1892 between "The Final Problem [FINA]" and "The Empty House [EMPT]". All of Mr. Lee's stories are "in canon", and some well-known Sherlockians provide guidance and input. This is a great all-ages series to engage  the next generation of Sherlockians (including my 9 year-old godson, who received a copy of The Complete Sherlock Holmes from his godfather), and is well worth checking out.

(Some information for this post taken from the Geeky Girls blog).