"A Certain Selection and Discretion" [IDEN] 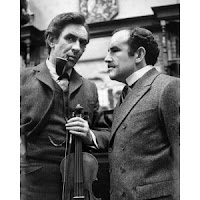 With the success of the recent Robert Downey Jr. Holmes film - and the speculation and anticipation for Sherlock Holmes: A Game of Shadows, it would be hard to believe that before now a theatrical film of Holmes with an atypical director would be successful in the marketplace.

After all, one only has to look to 1970's The Private Life of Sherlock Holmes

, directed by Billy Wilder, as an unsuccessful example....which is a shame, because it is a very underrated gem in Sherlockian film canon, providing a fascinating postmodern look into the Great Detective. Here's a video of the trailer with brief commentary from producer/director Dan Ireland:

In many ways, this version of Holmes is a more radical reinterpretation of the canon than the Downey film. In the first full scene, for example, Holmes (Robert Stephens) begins chiding Watson (Colin Blakely) for "exaggerating" certain things in his writing. (Yes, Wilder and writing partner I.A.L. Diamond are definitely playing "the Great Game.")

Although many critics and commentators have focused on the "subtext" of the Holmes/Watson relationship, what is so much more radical is that Stephens' Holmes seems much more...emotional. Lively. Possessing a certain depth and range of character that approaches a Jeremy Brett-style approach to the role.(Colin Blakely's Watson, however, tends more towards the buffoon-ish). Although Wilder directs this in a more straightforward style than his other work, it only serves to highlight the emotional underpinnings of the film - Private Life not only contains gorgeous footage and a wonderful soundtrack, these bring the performances forward, and quite frankly, make this an underrated gem of a movie.

What's even more remarkable about this film is that it was originally conceived as a three hour movie consisting of four separate stories, one involving Holmes in his youth. Sadly, due to cuts the movie is only two hours long with two distinct stories - one focusing on a Russian ballerina; the other a more intricate plot involving brother Mycroft (played by Christopher Lee, the only actor to play both Mycroft and Sherlock), Inverness, and....well, that would be telling. Thankfully, the DVD release contains scripts, shots, and footage from the "lost" portions of the film as part of the 'Special Features' selection.

Admittedly, there was a certain selection and discretion in what Conan Doyle wrote about in his stories - after all, he lived in a much different time with different standards. Many films have attempted to fill in the gaps of what we knew about Holmes, but The Private Life of Sherlock Holmes does so in an entertaining and thoroughly engaging way.

This is a must-view for any Sherlockians. Very highly recommended.