"Out of The Black Shadows" [TWIS] 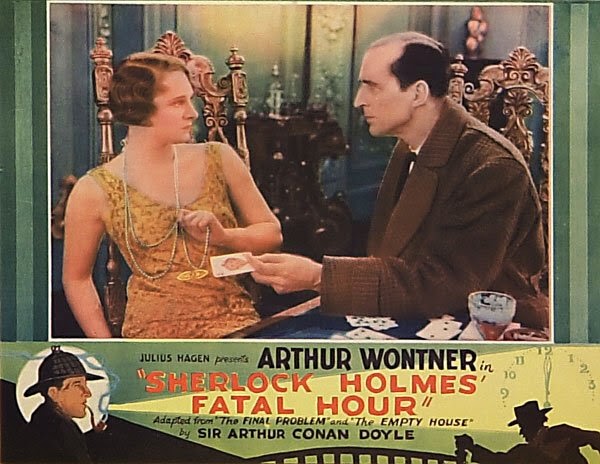 It's a story worthy of Conan Doyle himself - a "lost" early Holmes film that loosely adapts two key stories in the canon, and that is now freely available for viewing.

The Sleeping Cardinal (better known in the USA as Sherlock Holmes' Fatal Hour) is a 1931 film with Arthur Wontner as Holmes and Ian Fleming as Watson, serves as a loose adaptation of "The Adventure of the Final Problem" and "The Adventure of the Empty House". Like many early sound movies, the direction is still rather theatrical, focusing mainly on discussions in rooms rather than a more dynamic presentation.

Details about how the film became "lost" can be found its entry on the Internet Archive, which also allows for embedding and (like Public Domain Torrents) downloading the film in various formats.

But judge for yourself - is this a hidden gem ripe for rediscovery? A film that should have remained lost? Or is it just another one of many Holmesian adaptations that just simply needs to be enjoyed on its own merits?

This mystery, dear reader, is entirely yours to solve....

If you're not able to view the Hulu video, it's also available on YouTube.

If you would care to purchase the DVD from Amazon.com, it's available by clicking here or via the image below. In addition, the other three titles from the Wontner series are available on DVD: The Sign of Four

, The Triumph of Sherlock Holmes and Murder at the Baskervilles

. All are worth watching, if only to appreciate the transition of Sherlock Holmes from silent to "talkies" prior to the arrival of Basil Rathbone.

Editor's note: This is a guest post by Gordon Dymowski. Gordon regularly covers the intersection of Sherlock Holmes and the entertainment industry for I Hear of Sherlock Everywhere. You can also find him at Blog THIS, Pal! and Comic Related.