Dr. Bryce L. Crawford, Jr., BSI (“The Solitary Cyclist”) died on September 16, 2011 at the age of 96. He was the last remaining founder of The Norwegian Explorers, which was founded in 1948 at the University of Minnesota.

Dr. Crawford was born in New Orleans, received his PhD in 1936 from Stanford University and did post-graduate work at both Harvard and Yale. He was a University of Minnesota Professor of Chemistry from 1940 through 1985. He held the titles of Chairman of the Department of Chemistry and Dean of the Graduate School. Dr. Crawford was a member of the National Academy of Sciences since 1956, and was awarded the Priestly Medal in 1982. It is the highest honor conferred by the American Chemical Society and is awarded for distinguished service in the field of chemistry. 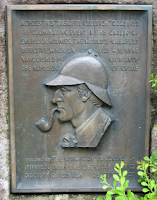 The commemorative plaque at Reichenbach Falls was the brainchild of the Norwegian Explorers, and Dr. Crawford was largely responsible for the inscription on the plaque…“Across this ‘dreadful cauldron’ occurred the culminating event in the career of Sherlock Holmes, the world’s greatest detective, when on May 4, 1891, he vanquished Prof. Moriarty, the Napoleon of Crime.” It was erected by the Norwegian Explorers and The Sherlock Holmes Society of London on June 25, 1957. Dr. Crawford co-authored “The Final Problem – Where?” an essay relating how the exact spot for the plaque was chosen. After he returned from his reconnaissance mission to Switzerland, he submitted a 48 cent expense report for the funicular ride to the top of the Falls. His reimbursement was denied because of lack of sufficient documentation, which became a continual source of amusement. To his delight, many years later he was given a frame with 48 cents in it.

Dr. Crawford was invested into the Baker Street Irregulars in 1985 as “The Solitary Cyclist.”