Meet the New 221B Baker Street

"I have my eye on a suite in Baker Street" [STUD] 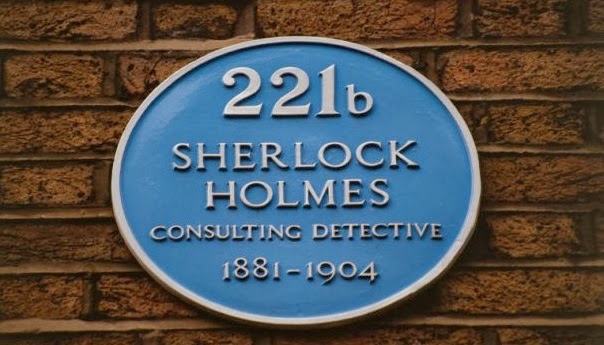 The new 221B Baker Street is here.

If you're tuning in to the new series Sherlock on PBS, you'll note the exterior shot that represents one of the most famous addresses in literature. It looks familiar, but it wasn't shot on Baker Street. More on the actual location in a moment.

As we all know, Baker Street of today doesn't look quite as cozy as the television version. Officially, Upper Baker Street didn't exist in Sir Arthur Conan Doyle's time, and the original location of 221B has been debated for decades in a number of Sherlockian publications, including The Baker Street Journal. Tourists, residents and Sherlock Holmes enthusiasts alike have strolled up and down that famous Westminster thoroughfare in search of the residence of the famous consulting detective.

The character of Sherlock Holmes was such a part of the public consciousness that even in Conan Doyle's time, correspondence would be addressed to 221B Baker Street. When the Abbey National Building company was housed in a section of the street that included 221, they employed a secretary that did nothing but answer the hundreds of letters that arrived there annually. They've since vacated the building, leaving the Sherlock Holmes Museum (officially at 239 Baker Street) to claim the letters addressed to 221B.

So, back to our new location. The producers of "Sherlock" selected 187 North Gower Street, London NW1 as the official home to our 21st century Holmes. You can see a real street view of the location below, courtesy of Google Maps - complete with Speedy's Snack Bar, which also appeared in the new TV series.


North Gower Street is actually an ideal location for our hero. It's not far from Euston Station (which saw some activity in A Study in Scarlet

, the story on which the first episode, "A Study in Pink," is based). This is a fairly academic area of the City - you'll find the British Library and British Museum not terribly far away, and University College London is directly there as well. This area also includes Montague Street, which is where Sherlock Holmes first settled when he came to London (mentioned in "The Musgrave Ritual").

You may note the blue plaque on 183 Gower Street in the photo above. It's actually a plaque dedicated to the memory of Giuseppe Mazzini, the Italian philosopher, politician and patriot who spent a few years in London in the 1850s. While there's no direct connection between him and the Sherlock Holmes Canon, there are a number of Italian references in the stories, including "The Six Napoleons" and "The Red Circle," primarily. If you haven't already done so, pick up a copy of Mandate for Murder from the Baker Street Irregulars' Manuscript Series. This volume looks at the influence of Italians in the Canon.

Finally, if you're at all interested, we have a limited supply of "221B" or "1895" oval stickers for your car, laptop, desk, or wherever else you might like to slap one on. You can grab one for yourself or as a holiday gift for the Sherlock Holmes fan in your life by clicking on the link below.


Do you have any interesting photos of Baker Street (221B or not)? Please consider sharing them with us on our Facebook Page at http://www.facebook.com/IHearofSherlock. Just click on the "photo" link or the camera icon to add them. Let's see how many shots - interior and exterior - we can collect to help visually define the location that's synonymous with Sherlock Holmes.

Please consider visiting our sponsors (in the right columns or in the footer) from time to time. It helps defray the costs associated with running this site.