Last night marked the U.S. premiere of "Sherlock" on PBS's Masterpiece MYSTERY! and it was marked by a first for the Sherlockian community: a live Twitter chat during which online followers would watch and participate in commentary about the show.

We were honored to have been asked by PBS to act as one of the hosts for the evening. We used our Twitter handle @BakerStreetBlog [Editor's note: now @IHearofSherlock] and employed the #sherlock_pbs "hashtag" so that people who are not following certain Twitter accounts have a single phrase to follow. This allows for a broader distribution of the conversation.

Other hosts for the evening included PBS's staff as @masterpiecepbs and Andrew Giulli as @strandmag, and we addressed questions, made observations, and kept the pace going for everyone involved. 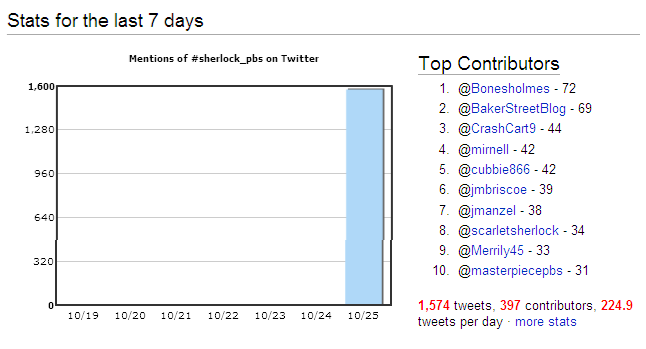 If you're interested in seeing a transcript of the entire chat, you can pull it up from http://wthashtag.com/sherlock_pbs by following this link. For us, part of the allure was how the updated version tied to the original stories. There were not only clear homages, but almost literal lifts as well. Here are but a few.

When Holmes showed he was wearing nicotine patches, he remarked "It is quite a three-patch problem."

After seeing Holmes and Watson chasing down a cab by taking short-cuts through alleys, this original quote came to mind:

And when the suspect showed Holmes how he gave his victims a choice of pills to consume:

In addition to the quotes and other obvious tie-ins ("A Study in Pink" vs. A Study in Scarlet), there were other elements that we thought were particularly clever and spot on for a 21st century Sherlock Holmes:


The evening was a fast-paced one (and we were glad that we were able to screen the episode prior to the airdate, in order to prepare for the session). At this point, we're not sure if we'll be repeating this on October 31, but stay tuned. But we're certainly looking forward to seeing the series unfold and at the same time, we're hoping that we introduced a few new people to The Baker Street Journal, the Sherlock Holmes Social Network, the podcast I Hear of Sherlock Everywhere, and our own blog.

as a holiday gift for the Sherlock Holmes fan in your life, we'd appreciate it if you order through us. Just use the links in this post or the Amazon links in the sidebar on the blog here.

Please consider visiting our sponsors in the right column and footer from time to time. It helps defray the costs associated with running this site.