"baffled by so slight an obstacle" [FINA] 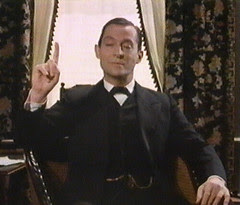 While many of us got our start with the Sherlock Holmes stories via the written page, there are others who find their way to the Canon via the silver screen or small screen. No matter how we each discovered Holmes, we all find our way to a visual representation - and particularly one that resonates with us.

. And despite a number of film and television adaptations over the intervening 40 years, it wasn't until the arrival of Jeremy Brett

that an entire generation pictured another face in their minds when they read the stories (in addition to Pagets and Dorr Steeles). The purists who were raised on Rathbone would never hear of such a usurpation. To this day, one tends to find a sharp split between Brettians and Rathbonians (or is that Rathboneheads?).

What we can't deny is the incredible influence Brett had on the Sherlockian movement, thanks to his complete dedication to the character. But his career spanned decades and included film, television and theatre alike, from Hollywood to the Old Vic. Which makes it all the more strange that he never received a BAFTA award. For those of you who don't know, BAFTA is the British Academy of Film and Television Arts. Think  Oscars and Emmys rolled into one, for our American readers.

Currently, there is a site angling for a posthumous BAFTA for Jeremy Brett: http://www.bafta4jb.com. There you'll find information about Brett and his career, as well as information about the site and its creators. They opine that if Heath Ledger could receive a posthumous BAFTA for his role as the Joker in The Dark Knight, then Jeremy Brett should be eligible for one based on his life's work.

What you can do to help
The site's creators are encouraging all interested parties to sign a petition supporting this effort. You can find it by clicking on the link. Please also consider sharing this post with others.