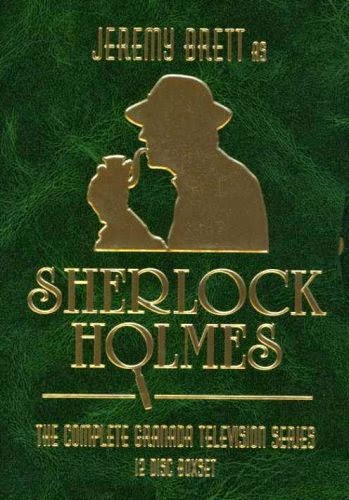 When I first discovered Sherlock Holmes, it was on the printed page, but it couldn't have been at a better time in my life. It was the mid-1980s and there were a number of other outlets for my Sherlockian enjoyment. The Basil Rathbone-Nigel Bruce series

was available on cassette; and most importantly for me, the Granada series with Jeremy Brett was airing on PBS.

For me, Jeremy Brett has always been the consummate Holmes (up until the last dreadful series and long-form movies). Certainly, he was quirky; but so was Holmes. And he was blessed with such Canonically accurate settings, dialogue and wardrobe (at least in the beginning) that it felt like the stories came to life.


While I've long had a the series on video, pieced together through MPI productions and the original PBS airings from "Mystery!" with the inimitable Vincent Price giving the introductions, I've longed for a complete set on DVD. Well, that wait is over.

, a set of 12 DVDs with all 41 programs, for a total of 43 hours, from MPI Home Video. You'll find this handsome set tricked out with bonus features that include include three commentary tracks, interviews with Jeremy Brett and Edward Hardwicke, an interview with Adrian Conan Doyle, a
report on the Sherlock Holmes Museum, and subtitles in Spanish and English. While it doesn't have quite as many bells and whistles as one might hope for from such a handsome set, it's a worthy addition to any Sherlockian's multimedia collection.

BBC 7 is playing the Carlton Hobbs Sherlock Holmes radio plays. You can listen to them on the BBC 7 archive site at http://www.bbc.co.uk/bbc7/listenagain/

Scott, what's the word on video/audio quality? The box is advertised as being a new transfer from the original masters ... is the quality notably better than the previous DVD releases?

James, great question. I went to Amazon and found a review that was just posted today which I think should answer your question (and hopefully cement your decision):

I bought all five former box sets a year ago, and have watched them multiple times, but I would always watch some episodes feeling cheated. The Adventures, and The Return box set (roughly the first 24 episodes, and two fill films) were in bad shape: it looked like they were transferred to DVD from an old VHS someone had in their basement, and it sounded like it too. The picture was grainy, and on some episodes the audio warbled.

This box set it [sic] what I was waiting for: I got [sic] in the mail from MPI yesterday, and have checked out some of the worse looking episodes from the old set...and they look marvelous. MPI transferred all of the episodes from the original negative, and cleaned up the menus: every single episode and film, cleaned up, and on 12 discs, and in two, high quality cases with a wonderful, heavy duty, cardboard slipcase. It even comes with a booklet which has information about every episode: an summary of the story, plus behind the scenes information about the making of.

This is the box set I wanted to buy a year ago, and this is the set MPI should have released in the first place. But its better late than never. Fantastic: anyone who is a fan should buy it, and anyone who has the first five box sets should sell them, and buy this. It is, truly, the Complete Granada Series.