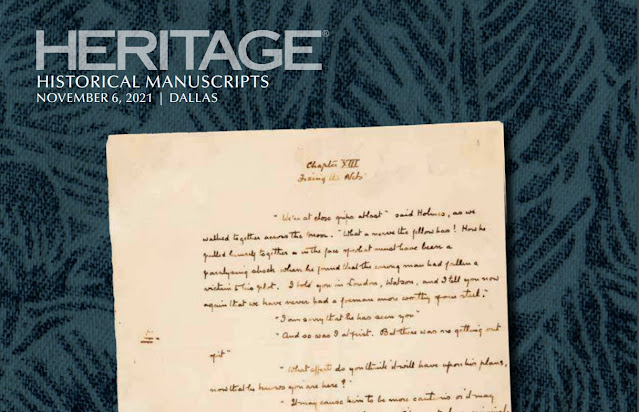 On Saturday, November 6, Heritage Auctions will auction off one of the rarest collectibles in the world of Sherlock Holmes: a single leaf from the manuscript of The Hound of the Baskervilles.

Arthur Conan Doyle wrote this novel in 1901 as a bridge between "The Final Problem" (1894) and "The Empty House" (1903). It was billed as a retrospection, not a resurrection. However, the public demand was so great following the serial publication of The Hound, and the financial offer so generous from Greenough Smith, editor of the Strand Magazine, that Conan Doyle couldn't refuse.

Doyle's American publisher, McClure, Phillips & Company came up with a brilliant publicity campaign for the book: they disassembled the manuscript and offered them, as single sheets, to dealers who purchased copies of the book.

"Unfortunately, due to the fact that this particular manuscript was written on highly acidic paper, and the individual pages were mounted with equally acidic backing material, most of the pages used in the promotion have not survived either their framing or their display conditions. Only a very small percentage exists today - and few are in as good condition as this particular leaf. This particular page is a highly desirable one — it contains actual mention of Sherlock Holmes — referred to as "Holmes"."

The leaf in question is the first page of Chapter XIII, titled "Fixing the Nets". It opens thusly:

"We're at close grips at last," said Holmes, as we walked together across the moor. "What a nerve the fellow has! How he pulled himself together in the face of what must have been a paralysing shock when he found that the wrong man had fallen a victim to his plot. I told you in London, Watson, and I tell you now again, that we have never had a foeman more worthy of our steel."

This is a significant auction, as this is one of only three privately-held manuscript pages with a chapter heading. Of the estimated 185-page manuscript, there are only 37 leaves known to be in existence, according to Randall Stock's Best of Sherlock census. Twenty-four are owned by institutions, ten are in the hands of private collectors, and the whereabouts of the other three are unknown (including one that was stolen).

The only full chapter known to exist resides with the New York Public Library; it was the subject of the first volume of the BSI Press Manuscript Series, The Hound of the Baskervilles (Ch. XI.), and is the chapter titled "The Man on the Tor".

Get those checkbooks ready. This isn't going to be a small affair.