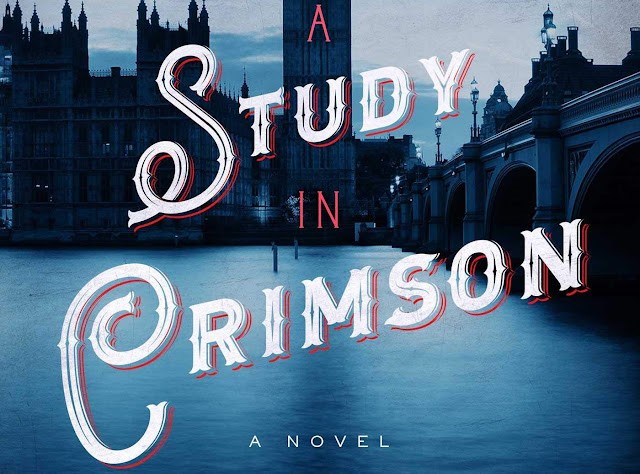 There have been many Sherlock Holmes stories and pastiches set in both the classic (1890 – 1910, or thereabouts) and modern eras. A Study in Crimson: Sherlock Holmes 1942 takes a different approach, with a setting inspired by the 1940s Universal Pictures film series starring Basil Rathbone and Nigel Bruce.

As told by Robert J. Harris, someone calling himself "Crimson Jack" is recreating the murders of Jack the Ripper. The book beautifully sets the stage with a minor case that introduces us to a Sherlock Holmes, who's been taking up government work and a John Watson who's volunteering at a hospital to do his part for the war effort. They're in their fifties, shaped by their service in the previous conflict (where Watson was wounded, as their backstories have been updated in time).

In a world of blackouts and sandbagged buildings and missing young men who have gone off to war, Holmes and Watson hunt a serial killer. The immediate mystery takes place against larger political questions: about supporting a fading empire, maintaining public morale, and changing professions and roles.

That's best seen with one of the new characters, Gail Preston, an American radio journalist. She's brash, smart, and puts Watson quite off-balance. She plays "charming and eccentric" quite well, manipulating suspects into divulging information. Then there's Commander Phil Rayner of military intelligence, sent to work with the group by Mycroft Holmes, and of course, old friend Inspector Lestrade.

The language nicely gives a historic flavor while still being immensely readable. The Holmes we see here is witty and a bit prickly. He tends to investigate in disguise and keep his cards close, while Watson (our narrator) doggedly follows along where instructed. Harris does a nice job keeping Watson baffled without descending into the idiocy that has been the public perception of Bruce's portrayal.

I blush to admit that I haven't actually seen those movies (yet!), so I had some concern about how much I'd enjoy this version (coupled with a feeling that Jack the Ripper is as overdone as Moriarty), but I was surprised at just how much I enjoyed it! The characters work whenever you set them, I believe, but the wartime environment plays up the drama. I'm eager to see the films that inspired this novel, now, as well as more in this series. A recommended read.

Find A Study in Crimson: Sherlock Holmes 1942 on Amazon or wherever books are sold.