"it is stupidity rather than courage to refuse to recognize danger when it is close upon you." [FINA] 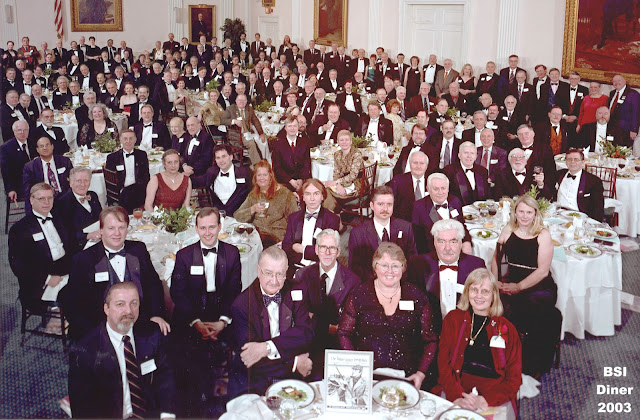 For the first time in its history, the Baker Street Irregulars Weekend will not take place in person in New York City in January.
The literary society dedicated to Sherlock Holmes was established on January 6, 1934 during a cocktail reception and held an informal first dinner in June 5, 1934. It was on December 7, 1934 that the formal dinner first got its start, but only one more was held (in 1936) before Edgar W. Smith came along and reinvigorated the tradition in January of 1940.
Since that time, the Baker Street Irregulars has held its dinner every January, without interruption. World War II didn't stop it. Nor did years that included protests, terrorist events, financial upheaval, or anything else. There it was always 1895, and the group survived.

“ ‘Danger is part of my trade,’ I remarked.
“ ‘That is not danger,’ said he. ‘It is inevitable destruction.’ ”
— “The Adventure of the Final Problem”

With the recent rapid rise in coronavirus infections across the United States, two dozen states are two  now delaying or modifying their plans to reopen. The uncertainty around the future of the virus in the country stems from a lack of a national plan and that dictum of individuality that flows through Americans, whose national phrase seems to have gone from "E Pluribus Unum" to "You're Not the Boss of Me."
So here we are.
The Baker Street Irregulars plans to hold the Distinguished Speaker Lecture on Thursday, January 7 and its traditional dinner on January 8 (the latter is for members only). There may be additional events added, as the "weekend" has stretched informally from Wednesday through Sunday, with other associated groups holding events throughout.
More information is available on the BSI Events page here.
January will be strange (indeed, as strange as these past few months have been). But Sherlockians are a determined and social group and will find a way to power through it. Creative and determined members thus far have hosted pop-up conferences, movie events, and social hours via Zoom since April, making up for the lack of in-person gatherings that define our clubable nature with our kinspirits.
Interestingly, I Hear of Sherlock Everywhere as a podcast has very rarely held in-person events. Our co-hosts have recorded all but two episodes from separate locations. And we've held a couple of live-streamed video recordings over the summer. Expect more like that.
Meanwhile, we hope to be back together at some point in 2021 (perhaps for the BSI's Sherlock Holmes and the British Empire conference?). Until then, we'll continue to churn out online content that we can all enjoy from the safety and confines of our homes.
8/02/2020 10:39:00 AM
blog, BSI, bsi2021, bsiweekend, News