“A fortnight—say at least a fortnight!” [MUSG] 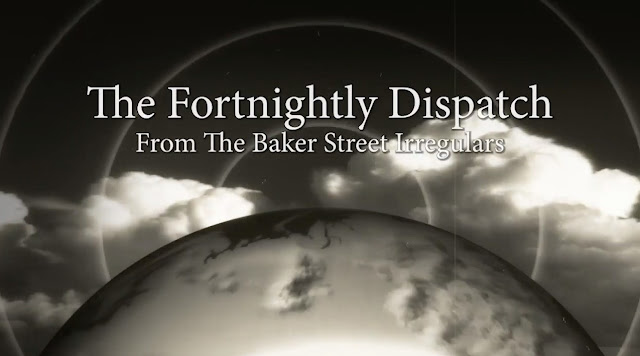 We've been podcasting since 2007, when we began recording I Hear of Sherlock Everywhere two years after we began writing the Baker Street Blog (which merged into IHOSE in 2013). In 2017, we added Trifles to our lineup. And in the last few months, we began occasional live broadcasts of some of our shows.

That is to say, we've experimented with frequency, format and style. Which is why it's thrilling to see Sherlockian colleagues who take up the mantle and begin experimenting as well.

In his introductory remarks, Steve said:


"The idea for this podcast came out of the desire in these socially isolated times to connect with fellow Sherlockians. After all, our hobby thrives most when we are connecting with our friends. And while we can watch the movies, read the stories and share messages on Facebook, really to talk and connect and have that kind of interaction with our fellow Sherlockians is vital.

"And so that's what this is about — reaching out and connecting with people across the country and around the world. We're going to be talking to people about a variety of subjects: books they've written or read, places they've gone, things they've done in the past or are planning to in the future. And we really want to connect we have the scion societies across the country as well.

"That relationship between the BSI and science societies is important. And let's face it the scion societies are where all the daily Sherlockian life happens, apart from annual events on the calendar. So we going to be reaching out and talking to people at local scion societies and what they're up to."

How is this different from I Hear of Sherlock Everywhere?

We initially wondered that ourselves. It turns out there are a few distinctions.

The most obvious fact is that the Fortnightly Dispatch is a video podcast, while I Hear of Sherlock Everywhere has been largely an audio program.

In addition, I Hear of Sherlock Everywhere tends to be topical — it's designed to allow the listener to do something as a result: read a book, see a show, buy a product — and it covers what's currently happening in the world of Sherlock Holmes.

The Fortnightly Dispatch is designed to be timeless and something of a shared history. They'll be sharing stories and the history of people and organizations in our hobby. New Sherlockians may not be aware of the rich and interesting history, and this is a way to build a base of knowledge for them.

The focus on local scion societies is an interesting angle. For years, the Baker Street Journal carried a section called "The Scion Societies" — a section dedicated to reports from the meetings. However, if you read them, they all followed the same format: so-and-so gave a toast, we ate, people gave papers, someone won a quiz, etc. Neither terribly interesting nor unique.

But it did create a way for all of the local Sherlockian societies to connect with the BSI and with wider readership. While "scion" status doesn't grant a society anything other than a nice certificate, it does seem to be important to connect our interest to local groups. And creating more awareness and interest in a library of episodes is a unique way to build on that.

While Burt Wolder and Scott Monty are both members of the BSI, I Hear of Sherlock Everywhere is not strictly a BSI production. While we feature many BSI publications, authors and members, we don't exist to promote the organization or its history; that's a by-product of what we do.