"ideas of humour are strange" [LADY] 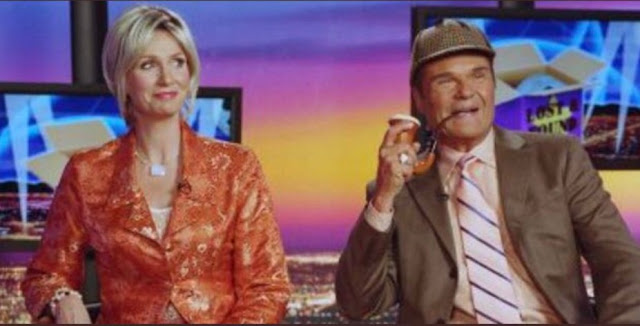 Actor and comedian Fred Willard passed away at the age of 86, due to natural causes.

Willard first gained attention with Martin Mull in the satirical talk show Fernwood Tonight in 1977, and later guest starred on many popular television shows, including recurring roles on Everybody Loves Raymond, Mad About You, and Modern Family. Anywhere he appeared, you could guarantee a laugh.

At the time of his death, his final project, Space Force, was in post-production.

But he was probably best known in the last twenty years for playing clueless but hilarious individuals in a series of mockumentary films, including Waiting for Guffman, Best in Show, A Mighty Wind, and For Your Consideration.


His connection to the world of Sherlock Holmes is a little more tenuous, but we picked up on a couple of instances in his mockumentaries.

The first is from the image above, taken from For Your Consideration. In this film, Willard played a Chuck, a host of a news entertainment show, along with Jane Lynch as his co-host, Cindy.

Here in the trailer for the film, you can see Willard in a deerstalker and holding a meerschaum pipe and magnifying glass, as he suggests a bit of ribald humor:


If you're in the mood to watch the entire film, it's currently available on Amazon Prime Video:

Willard took the idea of wearing a deerstalker to the next level in this clip from Best in Show, when he suggested "With the bloodhounds, why don't they put on a Sherlock Holmes hat and put a pipe in his mouth?":


Willard certainly had Sherlock Holmes on his mind during these projects. Do you know of any others over the course of his career?